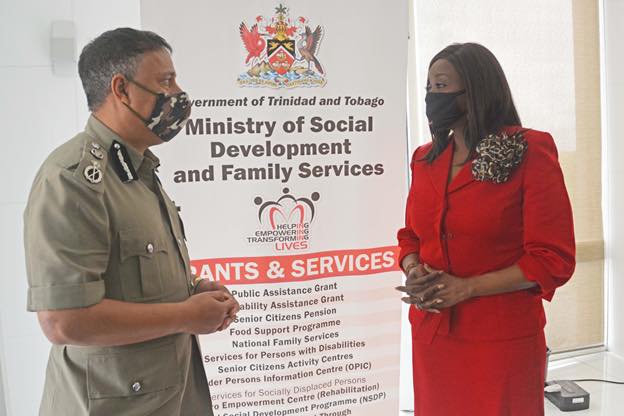 MSDFS and TTPS collaborate for safety of older persons

The issue of abuse of older persons continues to be top priority for Senator Donna Cox , Minister of Social Development and Family Services (MSDFS). This she disclosed during a meeting with Commissioner of Police, Gary Griffith, held Wednesday at the Ministry’s Head Office on St Vincent Street, Port of Spain.

According to the Minister, “There is no excuse for the abuse of older persons, particularly at Homes for Older Persons; and the Ministry of Social Development and Family Services stands ready to defend and protect the lives of older persons in Trinidad and Tobago”.

This was just one of many issues discussed at the meeting, which was also attended by both Permanent Secretaries at the Ministry, Jacinta Bailey-Sobers and Sheila Seecharan, as well as Deputy Permanent Secretary (DPS), Vijay Gangapersad; and representatives from the Trinidad and Tobago Police Service as well as the Municipal Police Department under the Ministry of Rural Development and Local Government.

Another significant issue discussed was that of Street Dwelling, which continues to receive attention from all spheres of the society, particularly in light of the present COVID-19 situation. Minister Cox indicated that the TTPS was a critical stakeholder in the Government’s thrust to reduce street dwelling, in terms of providing the necessary support in removing persons to transitional spaces; where they could be appropriately assessed and rehabilitated. In this regard, the Minister also hinted that meetings with the business community and municipal corporations were being planned in the coming weeks.

The Ministry’s plans to introduce the new First Responder System was also revealed by Minister Cox as she explained the need for such a System to provide support to families within their communities. Commissioner Griffith reiterated his commitment to help support any efforts by the Ministry for the various vulnerable target groups and indicated that his officers were ready to join forces with the Ministry to deliver on its mandate.

The Meeting ended with both parties agreeing to work closer to increase public awareness and sensitization efforts so that there is greater public involvement in issues related particularly to older persons in the country.