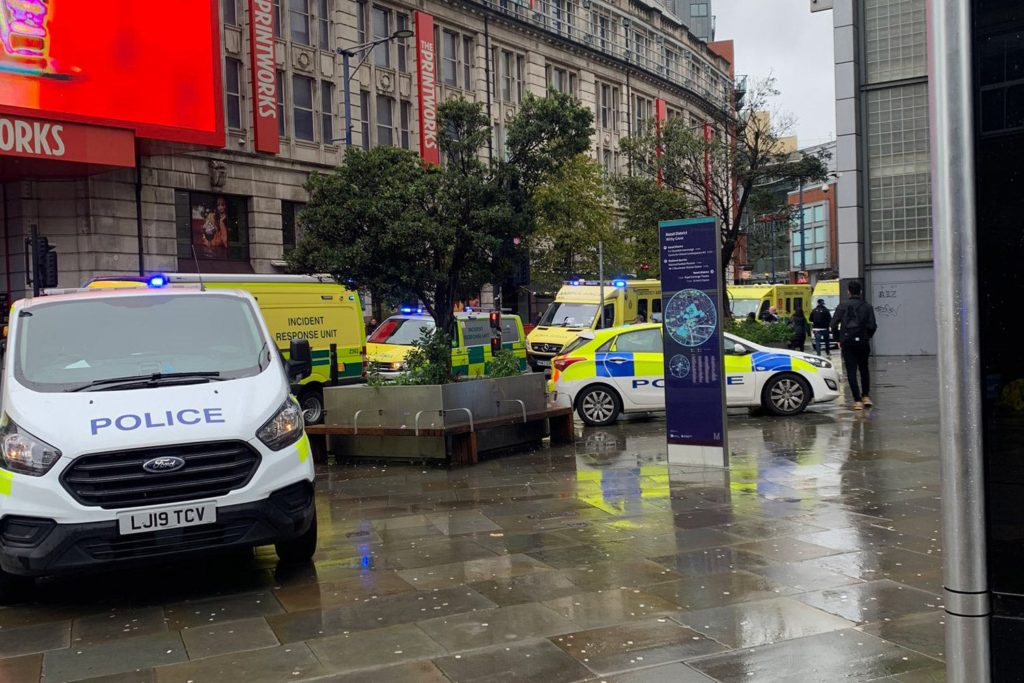 At least four people have been injured in a mass stabbing at the Arndale Centre in Manchester, police have said.

A man, 41, is being held on suspicion of terror offences after three people were stabbed and a fourth was hurt. The centre was evacuated after the attack at about 11:15 BST (British Summer Time), during which police said a man with a large knife “started lunging and attacking people”.

Speaking at a press conference, Assistant Chief Constable Russ Jackson suggested that up to five people were injured.

“The man attacked people around him,” he said.

“Although the injuries are nasty, we are told that, thankfully, none are life-threatening.”

In a tweet, Prime Minister Boris Johnson said: “Shocked by the incident in Manchester and my thoughts are with the injured and all those affected.” ACC Jackson said: “At 11:15 BST this morning, a man entered the Arndale shopping centre in Manchester city centre.

“He was armed with a large knife and, as he entered Exchange Court, began lunging, attacking people with the knife.

“Two unarmed police community support officers were in Exchange Court and attempted to confront the attacker.

“He then chased them with the knife as they were calling for urgent assistance.”

Two women, including a 19-year-old, are in a stable condition in hospital, while a man in his 50s is also being treated in hospital for stab wounds, police said previously.

One patient suffered “serious” injuries, North West Ambulance Service added. A shop worker, who gave his name only as Jordan, 23, said: “A man was running around with a knife lunging at multiple people, one of which came into my store visibly shaken with a small graze.

“Soon after, security staff told all retail staff to close their doors and move the public to the back of the stores.”

Jordan, who has only been working at the centre for a few months, said the attack took place on the ground floor.

Freddie Holder, 22, from Market Drayton, Shropshire, said he heard “a load of screams just outside” the shop he was in.

“Luckily she had quite a thick jacket – she thought originally it was a fake knife because of how easily it grazed off but police came in and said it was a real knife and she burst into tears,” he added.

“I’m still kind of in shock from it, I’m shaking a little bit… all shops had been locked down just for safety.

“The police arrived extremely quickly, which was very lucky.”

Social media posts show a large number of officers at the scene and a suspect being Tasered.

An image sent to the Manchester Evening News appears to show a patient being treated at a Starbucks cafe in the centre. Police originally said five people had been stabbed but have since clarified the number of people hurt.

A GMP spokesperson said: “In these early stages, we are keeping an open mind about the motivation of this terrible incident and the circumstances as we know them.

“Given the location of the incident and its nature officers from Counter Terrorism Police North West are leading the investigation as we determine the circumstances.”