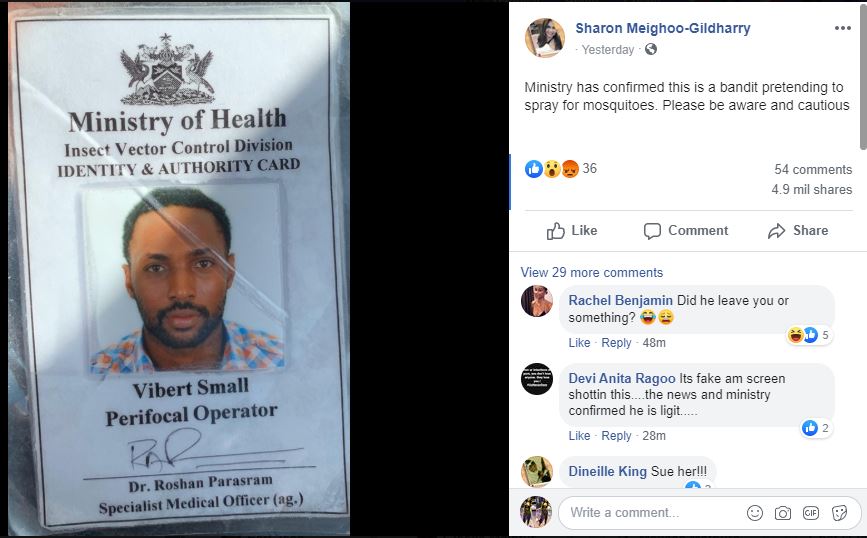 The Ministry of Health is defending its employee, Vibert Small, who has been wrongfully accused of being a criminal.

On Wednesday evening, a Facebook user by the name of Sharon Meighoo-Gildharry posted a picture of Small’s Ministry of Health ID badge to her Facebook page with the caption: “The Ministry has confirmed this is a bandit pretending to spray mosquitoes. Please be aware and cautious”. The post, which went viral and was shared over 4,000 times, caught the attention of the Ministry of Health who posted a statement in Mr. Small’s defense. The Ministry confirmed that Small is a Perifocal Operator employed with the Insect Vector Control Division (IVCD). The statement said, “Mr Small was authorized to perform insect vector control work in the West Moorings area on the day in question…by the Ministry of Health as scheduled”. The Ministry added members from the IVCD spray areas throughout Trinidad and Tobago during the year.

In response to the statement the woman apologised to Small, and for the sharing the post. She said that she received the news through a Whats App safety group and thought the information was true. Her main concern was protecting citizens from harm because of the state of crime in the country. The post was removed on Thursday evening.

The Ministry is urging citizens to allow inspectors to spray their areas as the exercise prevents the spread of diseases. All employees would be given a badge issued by the Ministry of Health which they wear when spraying the insecticide in the neighbourhoods. Persons who are still concerned about members of staff from the IVCD may contact the Division at (868)-612-4823.

Biden, Harris Showcase American designers at the US Presidential Inauguration 0