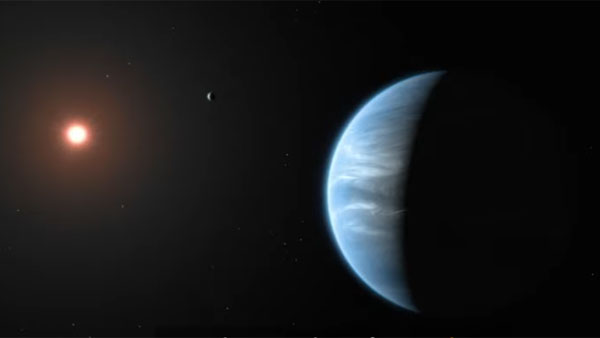 In a first study beyond the Earth’s solar system revealed water vapor in the atmosphere of an Earth-size planet, about 111 light-years away from the system. The discovery comes from years of observations of the conducted with the Hubble Space Telescope of exoplanet K2-18b.

However, beyond the size, the exoplanet differs significantly from our human-inhabited planet. The mass of K2-18b is more than eight times that of Earth’s, which means that either it’s an icy giant more like Neptune, or a rocky world with a thick, hydrogen-rich atmosphere, say Scientists.

The details of the exoplanet, meaning it is located outside of our solar system, were published in Nature Astronomy. A study of K2-18b conducted by the lead scientist, Prof Giovanna Tinetti of University College London (UCL) said the discovery of the massive exoplanet is “mind-blowing.”

“This is the first time that we have detected water on a planet in the habitable zone around a star where the temperature is potentially compatible with the presence of life,” she said.

Astronomer Angelos Tsiaras, coauthor of one of two studies that came out this week on K2, told reporters, “This is the only planet right now that we know outside the solar system that has the correct temperature to support water, it has an atmosphere, and it has water in it making this planet the best candidate for habitability that we know right now.”

Despite the detection of thousands of planets with the presence of water since 1992, space researchers always concluded these lands were uninhabitable for life as we know it on Earth.

The two separate research groups have found signs of water vapor on K2-18b, and potentially, rain, propelling scientist to plan for further studies of this particular exoplanet to look for indications of atmospheric gases, such as methane, ammonia, and carbon dioxide, according to National Geographic.​​​​​​​