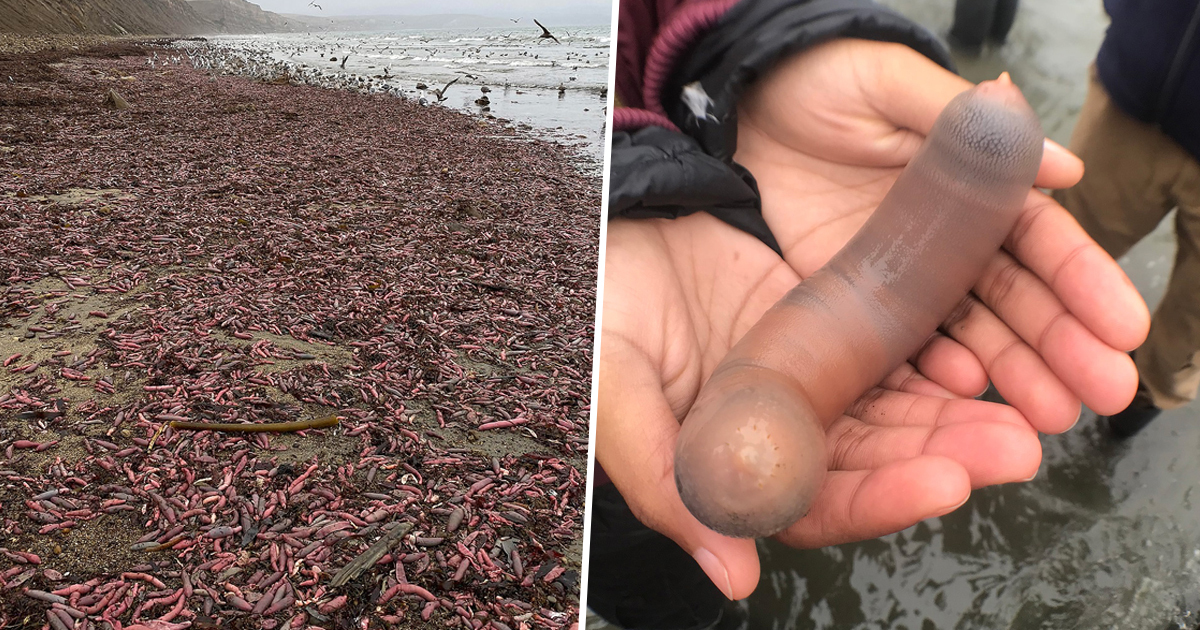 A California beach visitor was left puzzled after he was met with the sight of thousands of fat in-keeper fish, or “penis fish,” washed up on the sand.

A photo of the scene shows the 10-inch-long pink creatures covering the shore of Drakes Bay, on the coast of northern California, around 30 miles northwest of San Francisco. The image was taken by a man named David Ford on December 6th, who later shared it with the magazine Bay Nature for their “Ask the Naturalist” segment.

Ford asked Ivan Parr, a biologist in Northern California said “I saw thousands of these on Drakes Beach on Dec. 6th, after the recent storm. What happened?”

Parr responded in an article headlined: “Naturally, 2019 Closes with Thousands of 10-Inch Pulsing ‘Penis Fish’ Stranded on a California Beach.”

The animals live beneath the surface of the sand, which can be broken up by intense storms, throwing the worms out from their homes, Parr said.

Addressing their eye-catching shape, he continued: “You could be forgiven for being offended by the above photo: thousands of 10-inch wiggly pink sausages strewn about Drakes Beach.”

He explained that, “The fat innkeeper’s family (Urechidae) contains only four species worldwide, collectively known as either innkeeper worms or, well, penis fish,” adding: “This is why we prefer scientific names.” that.

Also known as Urechis caupo, these pink worms measure seven inches on average but can grow up to 19. The critters call U-shaped burrows in muddy sand their home, which can descend between 10 to 45 centimeters deep. To eat, the worms pulsate to collect particulates on a net made of mucus, which they then swallow. In front of its mouth sits a proboscis, or a sucking organ, and a ring of around 10 to 11 setae, or bristle-like structures, near its anus at the end of its body.

According to Parr, there is fossil evidence of their burrows dating back 300 million years, and the worms can live for up to a quarter of a century.

Innkeeper worms inhabit low intertidal to subtidal areas from Southern Oregon to Tijuana Slough, Mexico. But they are mostly spotted between Bodega Bay and Monterey, around 200 miles away, according to Parr.

He suggested seeing a fat inkeeper worm is “an almost uniquely California experience,” and half-joked the animal could be “State Worm.”

These phalluses are prey for flounder fish, sharks, rays, gulls, and otters. They are also considered a delicacy in South Korea, where they’re called gaebul, or dog genitals.

Ford told Vice’s Motherboard, “I didn’t expect to see such bizarre creatures on the ground.”

He said, “I had no idea what they might be…it went on for two miles.

“I walked for another half hour and they were scattered everywhere. There were seagulls lined up the beach the whole way having eaten so much they could barely stand. A quarter of them looked like they were still alive.” Ford said those had a “dead sea-creature smell,” said Ford.

19 ticketed for speeding in Santa Flora 0