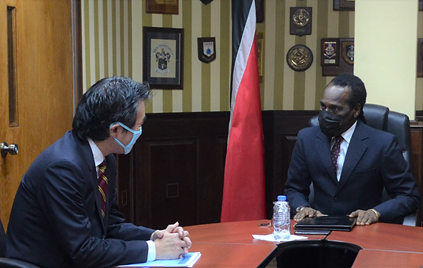 Strategies aimed at further strengthening the national security partnership between the Governments of Trinidad and Tobago and Japan, in the areas of advanced policing, military cooperation, and forensic investigations.

These matters were discussed during a courtesy call  Ambassador Extraordinary and Plenipotentiary of Japan to Trinidad and Tobago His Excellency Tatsuo Hirayama, held with Minister of National Security , Fitzgerald Hinds today.

The meeting took place at the Ministry of National Security, Abercromby Street, Port of Spain.

Ambassador Hirayama acknowledged Japan’s historic diplomatic relations with Trinidad and Tobago and extended congratulations to Minister Hinds on his recent appointment as Minister of National Security.

The meeting concluded with the Minister and the Ambassador committing to further collaboration, with the aim of making Trinidad and Tobago a safer and more resilient nation.