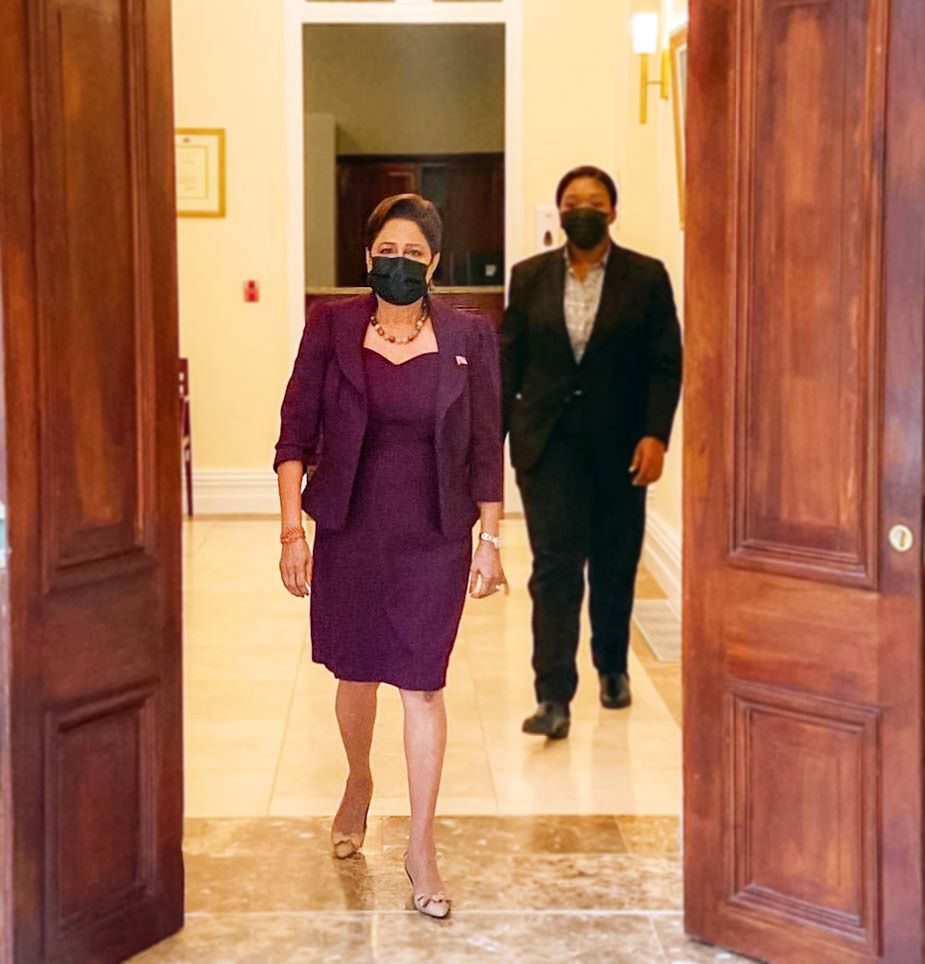 “Trinidad and Tobago cannot breathe today because of the failure of the Keith Rowley Government.”

Persad-Bissessar in a release issued this evening slammed the Prime Minister’s objectives saying, “this is a time for humility and not a time for arrogance. We call on the Government to engage all stakeholders and the opposition UNC to form a united front to fight Covid19.”

See full statement by the Opposition Leader below –

196 families and counting have lost loved ones because of abject mismanagement.

When the Covid numbers were at  minimum levels the Government was praising itself and patting itself on the back.

Now, as the Covid Crisis continues to plague Trinidad and Tobago, the Government is refusing to accept blame for the darkness that has descended.

Keith Rowley is responsible for the mayhem of today.  Vaccination is the only way out of this pandemic.

Trinidad and Tobago, your Government FAILED to act swiftly to procure vaccines.  The Government failed to request a gift of vaccines from the Indian Government as other nations in the Caribbean did. Rowley did so only after being pressured.

His claim of waiting for WHO to approve AstraZeneca vaccines makes no sense, as we gladly accepted a donation of 2000 vaccines from Barbados.

Barbados Prime Minister Mia Mottley had the foresight to get in line first for vaccines and wrote to the Indian Prime minister in January this year to ensure her people are vaccinated – before any WHO approval.

She did not wait around for handouts.  She took a proactive role as a true leader should.

The Rowley Government further failed to swiftly purchase vaccines from Pfizer earlier this year when an offer of 351,000 vaccines was put on the table for US$8.4 million.

Government went cap in hand to the private sector and when Ansa McAl offered to foot the bill and pay for the entire Pfizer batch in exchange for a tax concession – the Government refused.

It is baffling that Rowley is now saying Pfizer vaccines were not available for purchase.

Did the Government refuse to buy vaccines for the population because it was waiting for 100,000 vaccines from China?

Our citizens would not be dying today and our hospitals would not be running out of space had Government put the people first and bought the vaccines.

It is unconscionable that millions are spent on rent and contracts for families but there is a Scrooge mentality when it comes to buying vaccines for our people.

Over a year into the pandemic the Prime Minister is now looking to gift the people banana, sweet potatoes, dasheen and squash when action should have been taken early to procure vaccines.

The greatest gift is one of a vaccine.  Rowley keeps using the false narrative that small nations are unable to obtain vaccines. That is a
lie.

Barbados, with a population of 287,000, have given 75,300 jabs to its population to date. The Prime Minister also lied when he said vaccines are not available for purchase and the

Government had a & quote cheque in hand & quote; to make purchases.  El Salvador with just over 6 million people inked a contract to purchase 4.4 million vaccines for its people.

Prime Minister Rowley said he didn’t want to beg for vaccines, and it is clear now that he was simply waiting for donations to be thrown our way as our people become casualties.

On top of all of this, our nation’s borders have been closed for over a year, yet the Brazilian variant entered because of porous, unmanned borders. Another abject failure of the Rowley Government.

Trinidad and Tobago feels like it is trapped in a petri dish with a killer virus and a selfish leader who is obsessed over bananas instead of vaccines.

Accusing the population of being irresponsible is deflecting blame from poor leadership.  While we are grateful for vaccines gifted to T&amp;T, the reality is the Government failed to be proactive in the mission to vaccinate.

Covid19 response since February 2020 and we are no better off today. It is time they accept help from the wider society and stop blaming citizens for their failure to manage this crisis. We cannot continue with the same persons who have made no progress since February 2020.

This is a time for humility and not a time for arrogance. The UNC and many stakeholders have been trying to assist since the beginning of this crisis, but the Government has pursued its own way.

At this point, we call on the Government to engage all stakeholders and the Opposition UNC to form a united front to fight Covid19.