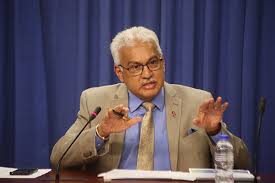 Over US $9 million spent on Covid vaccines

Health Minister Terrence Deyalsingh said that the Government has approved US$9.7million to be spent on purchasing a Covid-19 vaccine.

At a press conference a few weeks ago, Deyalsingh said that the Government had signed on with PAHO who invested in a project known as COVAX, which will enable the country to receive vaccines when the trial periods are over.

During his contribution to the national budget in Parliament on Friday, Deyalsingh said that 280,000 vaccines would be available in the first instance.

He revealed that the Government is also in discussion with a Chinese pharmaceutical company, Sinopharm, that is also developing another Covid vaccine.

He said that the Government was considering its storage options, as Nipdec’s C40 facility in Chaguaramas is currently being used to store over 100,000 influenza vaccines.

They are, instead, considering constructing a walk-in refrigerator, as a few of the vaccines need to be stored at 60-degree celsius.

“What we’re doing right now is looking at the range of storage conditions for the vaccines to build three purpose-built walk-in chillers, to keep them off-site, backed up with solar energy and diesel. All that is being prepared now.”