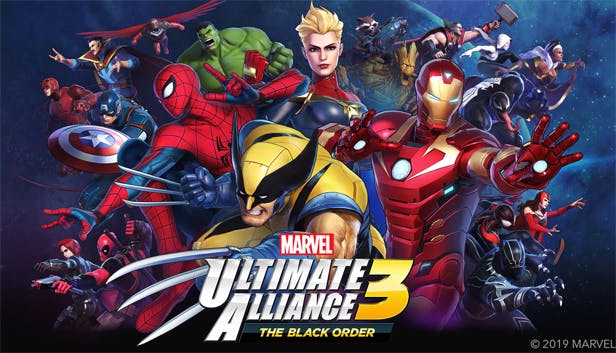 Marvel Ultimate Alliance 3: The Black Order easily earns its title, allowing fans to assemble superhero dream teams from a roster of nearly three dozen characters. Pulled from all corners of Marvel’s cinematic – and comic book – universes, the spandex-clad cast includes everyone from the core Avengers to more cult-favourites, like Elsa Bloodstone.

Whether you’re inclined to bring Captain America, The Hulk, Iron Man and Black Widow back together or create a Spider-Verse-focused crew, you’ll find each and every day-saver and do-gooder has been thoughtfully realised. More than mere palette swaps, each superhero sports their signature looks, personalities, animations and, of course, unique powers.

Speaking of those Thanos-thwarting abilities, each hero on your four-member team can unleash light and heavy attacks, as well as a quartet of skills showing off what they do best. While spinning Spidey’s various web-based powers is a blast, combining disparate skills with other characters is even more satisfying. Coupling Dr. Strange and Storm to conjure a sort of fiery tornado, for example, never gets old.

The game’s also brimming with resources and currencies, so unlocking and upgrading your superheroes – and their abilities – will keep you plenty busy when you’re not piling bad guy bodies as high as Stark Tower. There’s plenty of depth and tons of room to progress your team and individual characters, resulting in ample opportunity to experiment with different team-ups and even replay the campaign with a fresh focus.

While these elements nicely scratch that action-RPG itch, however, the leveling system siphons some of the alliance-building fun. Because characters don’t level while sitting on the sidelines, they can become quickly under-powered. You can certainly bring them up to speed, but it’ll take some tedious grinding to get there. An occasionally cumbersome camera, clunky frame-rate, and overcrowded screen can frustrate as well, especially if you’re attempting to save the world in the Switch’s handheld mode.

These gripes aside, the core gameplay – including multiple screen-filling boss encounters – is engaging throughout. And while I would’ve appreciated a bit more freedom in assembling teams of properly-leveled characters, I still had a blast mixing and matching my Marvel favorites. Whether you’re an old-school fan of the paneled page or saw your first Hulk Smash! on the silver screen, this iconic character-crammed offering has something for Marvel fans of all stripes.