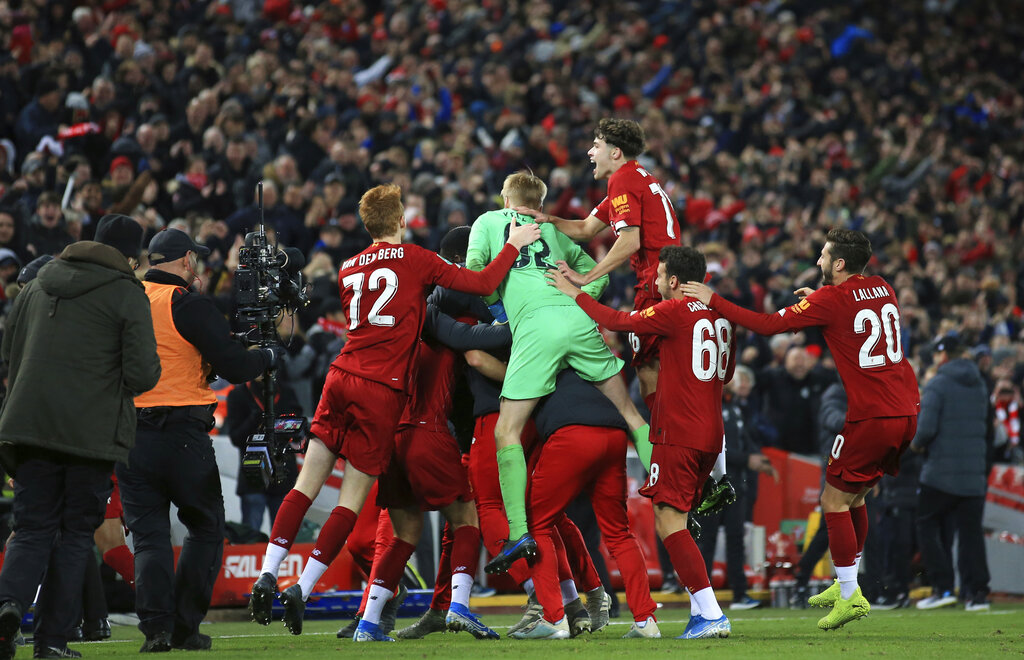 After 19 goals on a wild night at Anfield, debutant Curtis Jones scored the winning spot-kick as Liverpool ousted Arsenal in the League Cup on penalties after an astonishing 5-5 draw to reach the League Cup quarterfinals today.

The 18-year-old kept his cool in front of the Kop to send Liverpool through after the hosts trailed 3-1, 4-2 and 5-4 before a stoppage-time equalizer by Divock Origi.

On a crazy evening, it had appeared as though Joe Willock’s screamer had earned Arsenal victory, but Liverpool proved irrepressible as their barnstorming season continued.

Both Jurgen Klopp and Unai Emery changed their entire line-ups from the weekend’s Premier League action.

Liverpool took the lead in the sixth minute as Arsenal’s Shkodran Mustafi scored a comical own goal.

Arsenal leveled after 19 minutes when Mesut Ozil, given a rare start by Emery, picked out Bukayo Saka in space and after his shot was saved, Lucas Torreira tapped home.

Brazilian teenager Gabriel Martinelli scored his first goal of the night seven minutes later to put Arsenal ahead, scooping in from close range after a save by keeper Caoimhin Kelleher.

Liverpool self-destructed as Harvey Elliott’s poor pass went to Ozil who played in Saka to square for Martinelli to make it 3-1, but in the 43rd minute Elliott tumbled in the box at the other end and James Milner tucked away a penalty.

Milner’s dreadful back pass allowed Ainsley Maitland-Niles to make it 4-2 but Arsenal old boy Alex Oxlade-Chamberlain crashed home a beauty shortly after to close the gap.

Liverpool equalized in the 62nd minute when Jones played in Origi who turned superbly to fire into the roof of the net.

Willock’s goal sent Arsenal’s fans into raptures again but Origi scored with almost the last kick of the game.