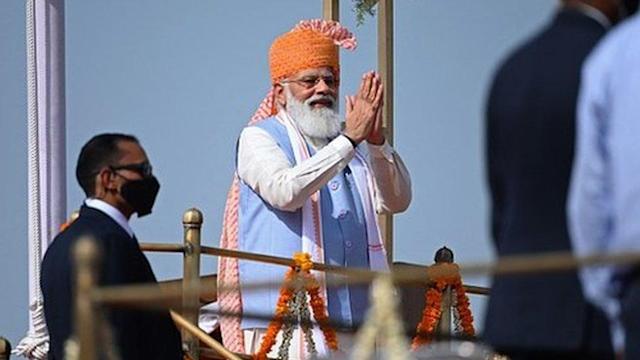 Mr Modi also paid tributes to those who died of the virus, saying “the pain of losing them will stay with us forever”.

He added that the country fought the virus “with extraordinary pace”.

But his government faced criticism when India’s second Covid ravaged many towns and cities in April and May.

The second wave left millions of people infected and overwhelmed the country’s fragile healthcare system to the point of collapse.

People died gasping for breath as hospitals ran out of beds and oxygen – leaving distraught family members pleading for help on social media. Even crematoriums in some cities ran out of space.

In his speech from Delhi’s historic Red Fort complex on Sunday, Mr Modi also praised India’s vaccination programme, saying more than 500 million people in India had received at least one dose. So far 12% of the population has been fully vaccinated in India.

The government aims to vaccinate all adults by the end of this year, but the drive has been hobbled by slow pace, shortage of doses and vaccine hesitancy.

There is a looming fear of a third wave as millions of Indians are still vulnerable.

Apart from focusing on Covid, Mr Modi spoke about India’s historic performance at the Tokyo Games, the country’s development goals, the economy and climate change.

India recorded its best-ever showing at the Olympics this year by winning seven medals – one gold, two silver and three bronze – surpassing the six it won in London in 2012. Many of the medal winners were invited as special guests at the ceremony on Sunday.

“These players have not just won all our hearts but have set an example for future generations,” Mr Modi said.

Mr Modi also spoke about his vision for India’s development, saying the next 25 years will mark the country’s growth story. He talked about boosting manufacturing and exports, encouraging home-grown industries and promoting innovation. He said his government’s aim was to ensure that the benefits of the economy should trickle down to every village and town in India.

But his promises come at a time when the Indian economy is struggling to recover from the damage caused by coronavirus. Its growth had slowed down even before 2020 and the pandemic only made it worse.

Loading...
Newer Post
Hadad not expecting any rush to retailers on Monday; says people do not have money to buy
Older Post
CoP stepping up efforts to have more officers inoculated