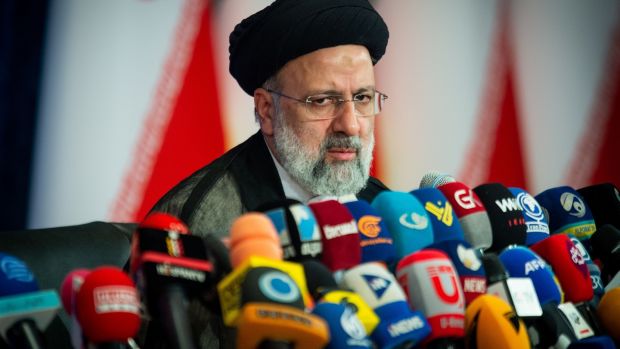 Iranian President-elect Ebrahim Raisi spoke to the press for the first time on Monday since his overwhelming electoral victory, urged the United States to lift sanctions and return to the 2015 nuclear deal, and said he doesn’t consider it necessary to meet with U.S. President Joe Biden.

In his remarks, Raisi called for “national unity” in Iran and said the country won’t return to international talks over its nuclear program until related U.S. sanctions are removed — the same stance taken by President Hassan Rouhani.

The United States left the nuclear deal, or the Joint Comprehensive Plan of Action, under former President Donald Trump, who also ordered new sanctions against Tehran. Removal of those sanctions has been the main sticking point so far in a U.S. return under Biden, as Iran has said any talks about a U.S. return are futile without first removing the sanctions.

Raisi said Monday that his chief goals are to improve the Iranian economy, fight COVID-19 and seek relief from U.S. sanctions.

Raisi said Iranian negotiators will continue talks over the nuclear deal with hopes that the sanctions will ultimately be lifted. Former U.S. President Barack Obama agreed to lift prior sanctions against Tehran as part of the deal, in exchange for hard limits on Iran’s nuclear activities and regular inspections.

The European Union, Britain, France, Germany, Russia and China were also parties to the pact.

“I am confident that by relying on God and trusting in the resources of the Iranian nation and manpower, especially the youth of this nation, and with the valuable resources that our country has, God willing, the situation will change in favor of the people,” Raisi added.

Raisi, who will take office on August 3, also said Monday that he doesn’t see it necessary to meet with Biden.

“[Iran’s election] was the message of the need to change the economic and living conditions,” Raisi said, according to MEHR News. “The message was to fight corruption, poverty and discrimination, and in general, to administer justice in all aspects of people’s lives.”

Many election-watchers say Raisi’s landslide election over the weekend was a foregone conclusion because many top contenders, including former President Mahmoud Ahmadinejad, were barred from running. Raisi, who lost to Rouhani in Iran’s last election in 2017, was widely seen as the clear front-runner in the race.