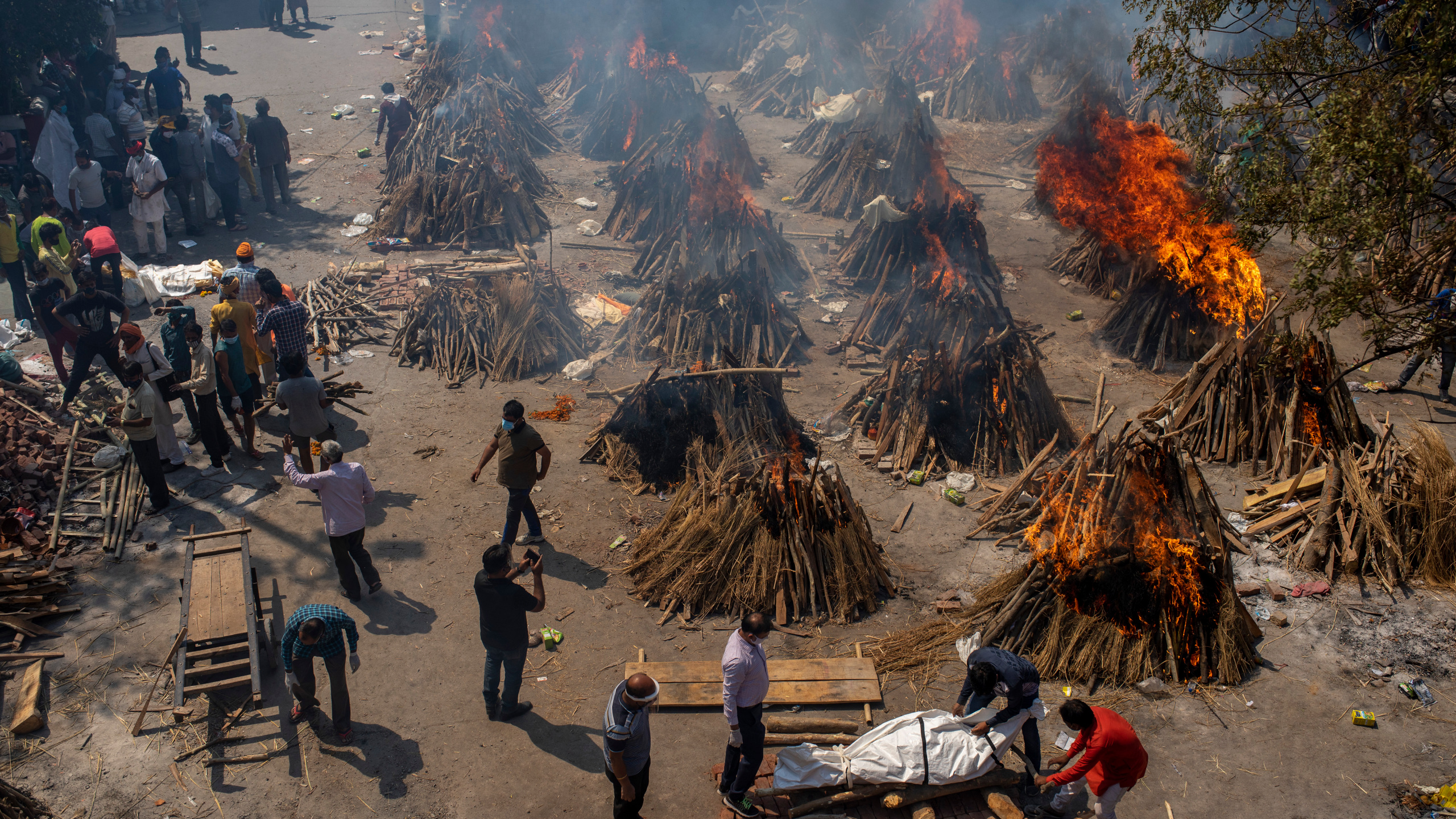 Officials in Delhi have been urged to find more sites for cremations as the city’s morgues and crematoriums are overwhelmed by masses of Covid deaths.

A second wave of the virus is ravaging parts of India, with 386,452 new cases reported on Friday – the biggest one-day increase on record for any country.

There were another 3,500 deaths nationwide and nearly 400 in Delhi – a record for the capital.

The total number of infections in the country has now passed 18 million.

The first consignment of emergency medical supplies from the US arrived on Friday, part of what the White House has said will be more than $100m (£72m) worth of support.

But oxygen supplies and hospital beds remain in desperately short supply across India, with relatives of Covid patients pleading on social media for help.

One senior Delhi police officer said that people were having to cremate family members in crematoriums not designated to take victims of Covid-19.

“That’s why we suggested more crematoriums should be set up,” the officer told the NDTV news channel.

India’s Health Ministry released detailed guidelines last year for the handling and cremation of people who have died of Covid, with special measures needing to be taken to avoid any potential reinfection.

India’s central government is facing mounting criticism over its handling of the pandemic and its decision to allow large election rallies and religious festivals to go ahead in recent weeks.

On Friday, the country’s Supreme Court defended the rights of citizens to express grievances and appeal for help on social media during the current coronavirus crisis, warning actions by the authorities to stop people doing so would be treated as contempt of court.

It comes after Twitter was asked to remove a number of posts which were critical of the government earlier this week.

The health minister defended the government on Thursday, saying the country’s fatality rate was the lowest in the world and that oxygen supplies were “adequate”.

Harsh Vardhan told ANI news agency that oxygen was now “being made available from many sources”, including from abroad, and that storage and cryogenic tankers were also being prepared.

A US military plane landed in Delhi on Friday morning, loaded with almost one million rapid Covid tests and 100,000 N95 masks. The White House has said it will donate 15 million N95 masks in total.

Jeremy Konyndyk, the executive director of the Covid task force at the US Agency for International Development, told AFP news agency that their first priority was to address India’s most “immediate needs”.

The UK also donated ventilators to India earlier this week.

However, many experts in India say more is needed. On Tuesday, Mumbai-based Dr Zarir Udwadia told the BBC that the aid being offered was “a drop in an ocean”.

On Saturday, all adults above the age of 18 in India will become eligible for vaccination, but there are widespread concerns about the availability of shots. India is the world’s biggest producer of vaccines but does not have enough stock for the estimated 800 million people who will become eligible.

So far, fewer than 10% of people in India have had a Covid vaccination.

A number of states are reporting shortages of the vaccine. On Thursday, Delhi’s health minister Satyendar Jain said the capital had run out of doses, and that they were waiting for fresh supplies from private companies.

PM Rowley: No change for in house congregation in Bars 0