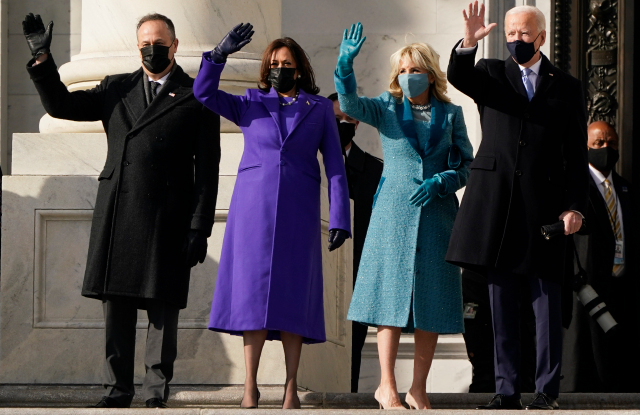 Biden, Harris Showcase American designers at the US Presidential Inauguration

The inauguration of Joe Biden and Kamala Harris as President and Vice President on Wednesday took place amid a slew of firsts: Unprecedented security, in the aftermath of the storming of the Capitol on January 6; an audience without people, barring dignataries; the swearing in of the first African-American, Asian-American, and first Asian Vice President; and the inauguration ceremony of the oldest President in US history.

In reference to fashion, Joe Biden and Kamala Harris are showcasing American designers at their inauguration.

Jill Biden is wearing an ocean-blue wool tweed coat and dress by American designer Alexandra O’Neill of the Markarian label. This Biden ensemble could end up being donated to the Smithsonian’s famous First Ladies Collection, because there won’t be any inaugural balls for the Biden inauguration and thus no inaugural gowns.

Aides say Kamala Harris,who often sports her signature Converse Chuck Taylors and pearls, is wearing Christopher John Rogers and Sergio Hudson. Both are Black designers, Rogers is from Baton Rouge who now lives in New York City, and Hudson is a Black designer from South Carolina

Biden, who is set to be the oldest president in American history, will succeed President Donald Trump, 74, who has decided not to attend the swearing-in ceremony. Harris will take over the office of the US Vice President from 61-year-old Mike Pence.

Loading...
Newer Post
WATCH: Joe Biden Sworn in as 46th President of the United States
Older Post
Joe Biden and Kamala Harris Arrived at the US Capitol to take Oath

Duke’s PDP open to an alliance 0