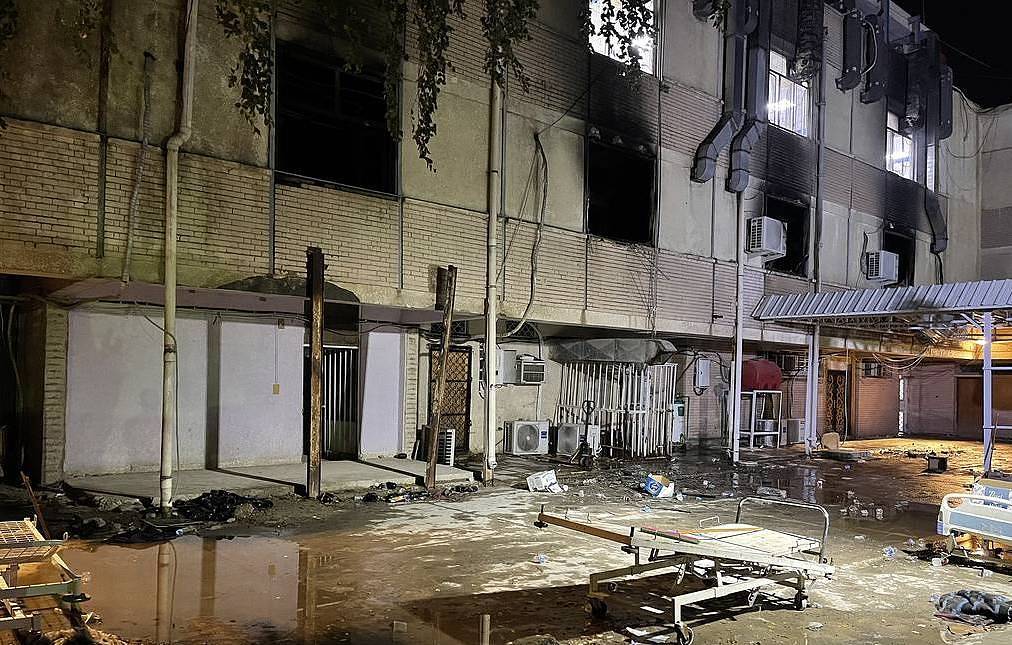 82 Dead And More Injured In Fire At Baghdad Hospital

Eighty-two people died in a fire that swept through a hospital in southeastern Baghdad early Sunday, the Iraqi Interior Ministry said.

Some 110 others were injured in the blaze at the Ibn al-Khatib Hospital, which cares for COVID-19 patients, Iraq’s state news agency INA quoted the ministry as saying.

The ministry doubted there was a criminal motive for the fire that reports say started at an intensive care unit.

“Investigations are ongoing. There are technical and criminal investigations to determine the circumstances of the incident,” the head of the ministry’s press office, Saad Maan, told INA.

Some attributed the blaze to an electrical short-circuit while others said it was caused by faulty oxygen devices, INA reported.

The blaze gutted the ground floor of the hospital, including a room where COVID-19 patients were on ventilators, said an eyewitness.

Watch the a report courtesy Skynews:

After the fire broke out, local mosques called on people to hurry to the hospital and take part in rescue efforts, said Sejad Abdel-Hadi.

“Dozens of young people stormed the departments hit by the fire,” the Iraqi man told dpa by phone. He said tens of patients were rescued and transferred to other hospitals by volunteers by private car.

“There were charred bodies,” he added.

Later Sunday, the country’s health minister, the Baghdad governor and the head of the city health department were suspended, and the government referred them to an inquiry into the tragedy, INA added.

The government also decided at an emergency meeting to launch another investigation, to be led by Interior Minister Othman al-Ghaneimi.

The government set five days for completing that inquiry.

Al-Kadhimi ordered the dead in the fire to be regarded as “martyrs,” a designation that entitles their families to financial rights.

“Today, martyrs have fallen as a result of carelessness. If we do nothing, others will fall tomorrow,” he added in a statement.

Iraq declared three days of national mourning for the victims.

“We mourn the loss of life in the fire at Ibn al-Khatib hospital in Baghdad,” national security adviser Jake Sullivan said in a statement.

“We are in touch with Iraqi officials and have offered assistance. Our strategic partnership with Iraq is first and foremost a partnership between our two peoples. We are prepared to support the Government of Iraq and its people at this tragic moment.”

The U.N. special envoy for Iraq, Jeanine Hennis-Plasschaert, expressed her shock and called for stronger protection measures to prevent such disasters. “The U.N. continues to provide critical support to Iraq’s health sector amid the pandemic and surging infections,” she said.

Iraq has had more than 1 million coronavirus cases, becoming the Arab country with the highest infection tally.