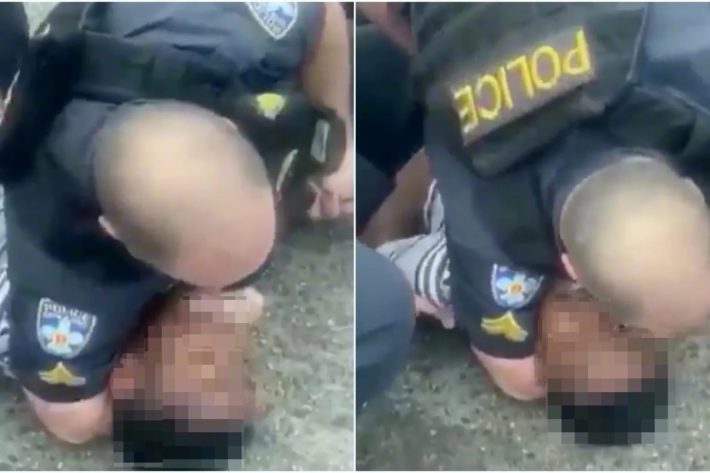 Black Teen Pinned Down by US Police

U.S. Baton Rouge Police Department is investigating an arrest captured on video Sunday that appears to show an officer wrapping his arm around the neck of an America-African teenager.

According to NBC News, officers were responding to a call about a disturbance last Sunday. Baton Rouge police Chief Murphy Paul told reporters that the officers initially managed to deescalate the situation and left the scene. They were called back an hour later and that’s when shit went south.

About an hour later, officers were called to the same location where they took two juveniles into custody, Paul said. One was charged with battery of a police officer, while another was released to a parent, according to police.

In video shared on Twitter on Sunday, an officer appears to pin the 13-year-old to the ground with his arm around his neck as a crowd of onlookers urge him to get off the boy. Someone repeatedly yells, “You’re choking him!”

Sharon Weston Broome, the mayor-president of Baton Rouge, said in a statement that the incident involving the teenager is a “concerning encounter” that warrants a “prompt, transparent review.”

She and Baton Rouge police Chief Murphy Paul have reviewed the footage, but a decision has not been made on disciplinary action for the officer seen in the footage, Broome said during a news conference Monday.

NBC News does not know what happened before or after what’s shown in the video and authorities have not released the officer’s name. The Baton Rouge police union and Ron Haley, an attorney for the child’s family, did not respond to a request for comment Tuesday.

Haley told The Advocate, the local newspaper, that the teen was released from juvenile detention Sunday night.

He called for authorities to release body camera footage, which Broome said would be made available to the family Monday. The mayor’s office and the police department were also seeking court permission to publicly release the body camera footage because the incident involves a minor, Paul said.

“I appreciate the swift response from Mayor Broome and the promises made by Chief Paul,” Haley said in a statement, according to The Advocate. “However, too many times in our community we see obvious police misconduct go unchecked and unpunished.”

“No unarmed child should be choked and manhandled by a police officer,” Haley said.