US NFL player Chad Wheeler was arrested over the weekend after he allegedly got in a “physical fight” with his girlfriend who is African-American. According to a police report, 27-year-old Wheeler was involved in an altercation with his girlfriend in Kent, Wash. Late Friday night, officers say they responded to a call that a woman had locked herself in a bathroom and called 911 claiming she was being “killed” following a fight with her boyfriend.The woman reportedly told cops that she was bleeding and had suffered a dislocated arm.When cops arrived, they said in the report they heard screaming coming from the residence. When they entered the home, they said they continued to hear screaming coming from the bathroom — where they say they found Wheeler standing next to the woman.Police reported that they were told the altercation began after the woman refused to bow to the NFL player. Wheeler then allegedly grabbed the woman, threw her on the bed, and choked her until she was unconscious.According to the report, when the woman regained consciousness, Wheeler said, “Wow you’re alive?” That’s when the woman locked herself into the bathroom to call for help.

Wheeler, who was described in the report as uncooperative with officers, was arrested and eventually booked on a domestic violence charge.

A friend of the offensive lineman’s girlfriend shared a photo of her horrific injuries in a post online on Tuesday. She said Wheeler continued to eat dinner while his girlfriend laid motionless on the floor. She deleted the post, but not before it was picked up by Black Twitter and shared thousands on times. 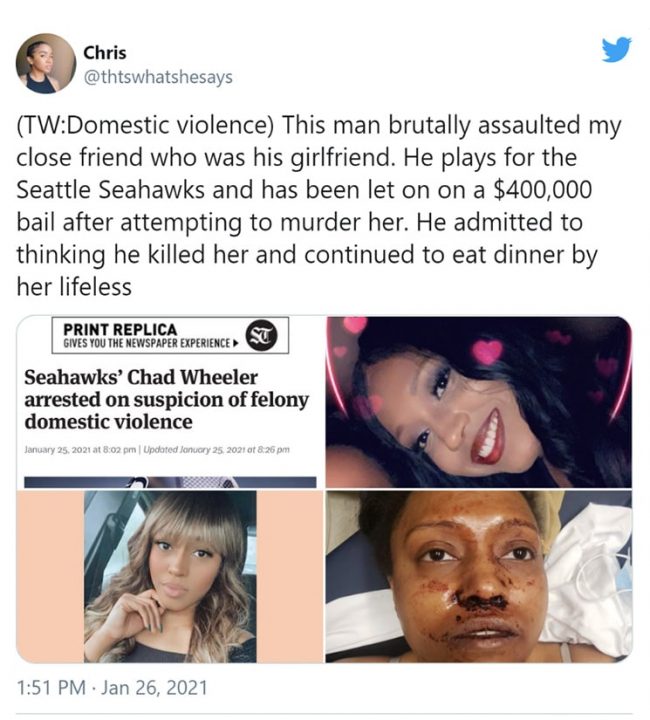 Jail records show Wheeler was booked at 1:19 A.M. on Saturday and was released at 9:18 A.M. on Tuesday.The Seahawks released a statement on the incident on Monday night, saying, “We are aware of the situation and still gathering information.”