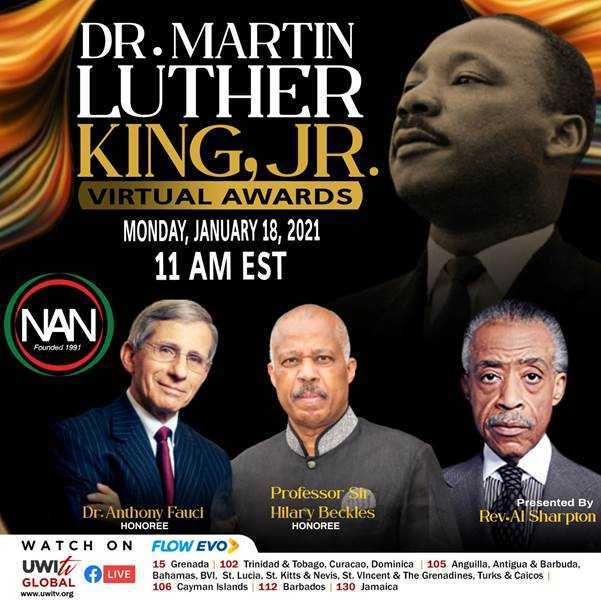 Vice-Chancellor of The University of the West Indies, Professor Sir Hilary Beckles has found himself in the midst of great company as he set to receive a very prestigious American award.

According to a release from the UWI, Sir Hilary will receive the Martin Luther King Award from the US National Action Network (NAN), next Monday 18 January 2021.

The UWI reports that Reverend Al Sharpton, President and Founder of the US National Action Network (NAN), confirmed that the organisation’s Dr Martin Luther King Jr Day awards will be conferred on Professor Sir Hilary Beckles, as well as Dr Anthony Fauci at the annual breakfast event on MLK Day, January 18, 2021.

Sir Hilary, who is also President of Universities Caribbean, Chairman of the Caribbean Examinations Council, Chairman of the CARICOM Reparations Commission and Advisor on Sustainable Development to former United Nations Secretary-General Ban Ki-moon, will receive the “Peace and Freedom Award”.

This year marks the 30th anniversary for the MLK awards by which the work and the legacy of Dr King are celebrated and persons honoured with a view to refocusing and sustaining his dream.

Sir Hilary is recognised for his global advocacy, academic scholarship and intellectual leadership in support of social justice, institutional equity, and economic development for marginalised and oppressed ethnicities and nations.

The Dr Martin Luther King Jr. Day ceremony and awards will be held in Washington, DC on Monday, January 18, 2021 from 11:00 am (EST/Jamaica) / noon (AST/Eastern Caribbean).

The event will be streamed live on:

Tancoo: Gov’t failure to blame for massive tax loss due to illicit trade 0

Unsplash is being acquired by Getty Images 0