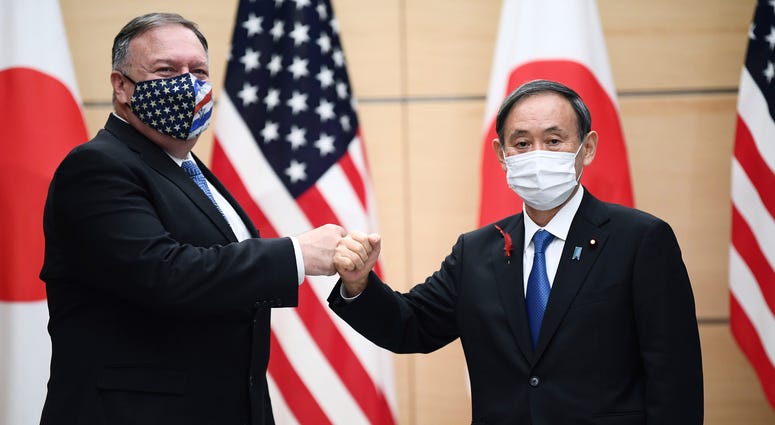 US Secretary of State Mike Pompeo harshly criticized China on Tuesday in a meeting with his counterparts from Australia, India and Japan, a meeting with a view to presenting a united front against the Asian giant.

Pompeo’s trip to Japan has been sustained despite the coronavirus crisis also hitting Washington, where President Donald Trump and some of his advisers tested positive for COVID-19.

Given the situation, Pompeo has given up two additional stops, in South Korea and Mongolia, which were part of his trip to Asia.

The Tokyo meeting of the “Quad,” an informal strategic grouping formed in 2019 that brings together the United States, Australia, India and Japan, remained on the agenda. Before leaving Pompeo declared that it is “something we have worked on for a long time.”

Pompeo’s visit to Japan is the first by a senior US official since new Prime Minister Yoshihide Suga took office last month in Tokyo. Pompeo will be greeted by Suga this Tuesday.

“In his first statement after taking office, Suga described the free and open Indo-Pacific region as ‘the foundation of regional peace and stability.’ I fully agree,” Pompeo said Tuesday.

“I would just add that the cornerstone of this foundation is the American-Japanese relationship, and the security and prosperity it brings to our peoples,” he added before a meeting with Japanese Foreign Minister Toshimitsu Motegi.

This quadripartite association was especially promoted by Abe. The objective of the main democracies in the region is to intensify cooperation in the face of an increasingly powerful and ambitious China but for now, the significance of the group is rather symbolic.

Before leaving for Japan, Pompeo stated that he expects “some important announcements, some significant achievements” from this meeting.

These advances will be announced after the return of the ministers to their countries, to consult “with our leaders to make sure that everything is in order for everyone,” he added.

The aim of the main democracies in the region is to strengthen their cooperation in the face of an increasingly powerful and ambitious China.

For its part, China does not hide its opinion on the “Quad”. Last week, the Chinese Foreign Ministry urged countries to avoid “closed and exclusive groups.”

“We hope that the countries concerned will be able to advance from the common interests of the countries of the region and do more things that favor peace, stability and development in the region, and not the other way around,” said the ministry spokesman.