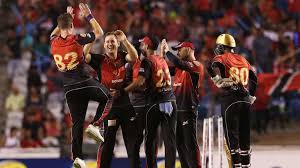 Trinbago Knight Riders makes it through to the semi-finals

Denesh Ramdin played a remarkably patient, but ultimately match-winning knock alongside Lendl Simmons then Kieron Pollard to take Trinbago Knight Riders (TKR) to a well-timed victory over the St Kitts & Nevis Patriots in the Hero Caribbean Premier League (CPL), booking their place in the semi-final on Thursday 10 October at Brian Lara Cricket Academy.

Having won the toss and bowled it was an ideal start for Kieron Pollard’s TKR side. Mohammad Hafeez was well caught by a back-pedalling Akeal Hosein at extra-cover for just 11. Chris Jordan got one straight through Brooks’ expansive straight drive in the final over of the fielding restrictions, bringing Laurie Evans to the crease.

Having gone for just 1 off his first over back from injury, Sunil Narine then had Evin Lewis caught and bowled off a leading edge for 9. The Patriots were 30/3 with no runs off the bat and just two wides off Narine’s first two overs.

Evans and Devon Thomas attempted to rebuild amidst showers in Guyana but it was anything but easy against the supreme spin of Narine. After a couple overs of simply ticking it over, Pierre was the man targeted, going for 37 off his four, with Evans and Thomas using their feet magnificently.

The 50-partnership was brought up in the 14th off 46 balls, but on the last ball of Narine’s miserly spell Thomas was given lbw for 10. Clearly suffering from pain in his finger, Narine astonishingly finished with 2-10 and 19 dot balls from his four overs.

Laurie Evans reached 50 off 44 balls with a boundary off Sussex teammate Chris Jordan in the 18th over. Skipper Carlos Brathwaite struggled to get going, holing out to Colin Munro at long on later in the Jordan over for 3.