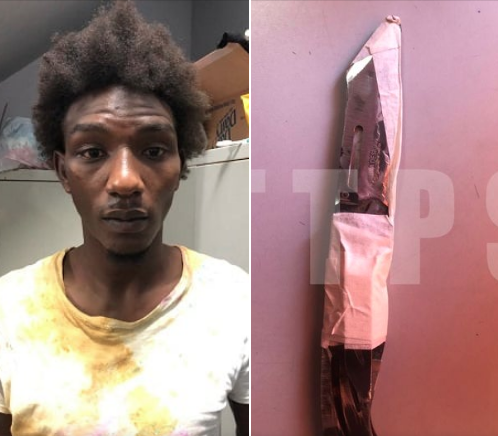 A 25-year-old man will appear before a Port-of-Spain Magistrate today to answer to a series of charges arising from an incident on February 15th during which a police officer was attacked.

The charges stem from an incident in which NEDTF officers were responding to report of loud music in the La Canoa Road, Lower Santa Cruz area when they came across a group of about 20 persons.

Upon seeing the officers, the group dispersed, however, one man, who appeared to be highly intoxicated, approached the officers and allegedly began behaving in an erratic manner while using obscene language towards the officers.

Officers cautioned the man about his behaviour but attempts to dissuade him were futile. He continued which caused the officers to initiate an arrest.

While attempting to arrest the suspect, a struggle ensued during which the man began fighting with one of the officers. During the altercation, he allegedly slashed the officer’s back with a knife resulting in the officer sustaining several injuries. Other officers immediately intervened and subdued the suspect.

The injured officer and the suspect were taken to hospital where they were medically treated.
WEBB was subsequently charged with the offences.

Near 1,400 To Graduate During Virtual Ceremony At The UWI Cave Hill Campus This Weekend.

Over Nineteen Thousand Persons In Tobago Fully Vaccinated Against Covid-19.

Near 1,400 To Graduate During Virtual Ceremony At The UWI Cave Hill Campus This Weekend.

Near 1,400 To Graduate During Virtual Ceremony At The UWI Cave Hill Campus This Weekend. 0