Two men were arrested and a pistol and quantities of ammunition and marijuana seized, by officers of the Western Division Task Force, during an anti-crime exercise in the Diego Martin district, this morning.

The exercise was conducted around 11:45am, on Thursday 1st August, 2019, officers proceeded to Hillview Road, Industrial Estate, Diego Martin, where they had reason to stop and search two men; both 24-year-old, from the Diego Martin district.

The search resulted in one Smith and Wesson pistol, loaded with four rounds of ammunition and 1.6 kilogrammes of marijuana being found in their possession. The drug has an estimated street value of $16,000. Investigations are ongoing. 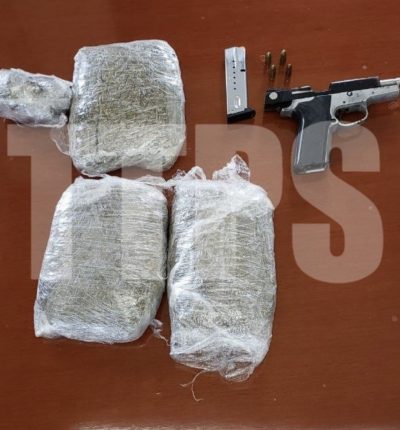 Cardi B and her sister are being sued for defamation

Cardi B and her sister are being sued for defamation

Cardi B and her sister are being sued for defamation 0