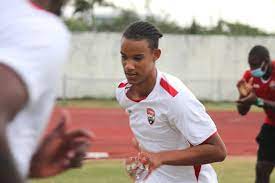 The video was allegedly recorded by the young Griffith himself, and Jack is seen telling him, “I don’t care who you are going and tell because your family does not have more influence than me in Trinidad football.”

The incident, according to wired868, occurred mere hours before TT’s disappointing World Cup qualifying match against The Bahamas on Saturday 5 June.

Griffith III, is said to have reacted angrily to the admonition and began taping the exchange, which has now been released.
The matter is now before the FIFA-appointed Normalisation Committee.