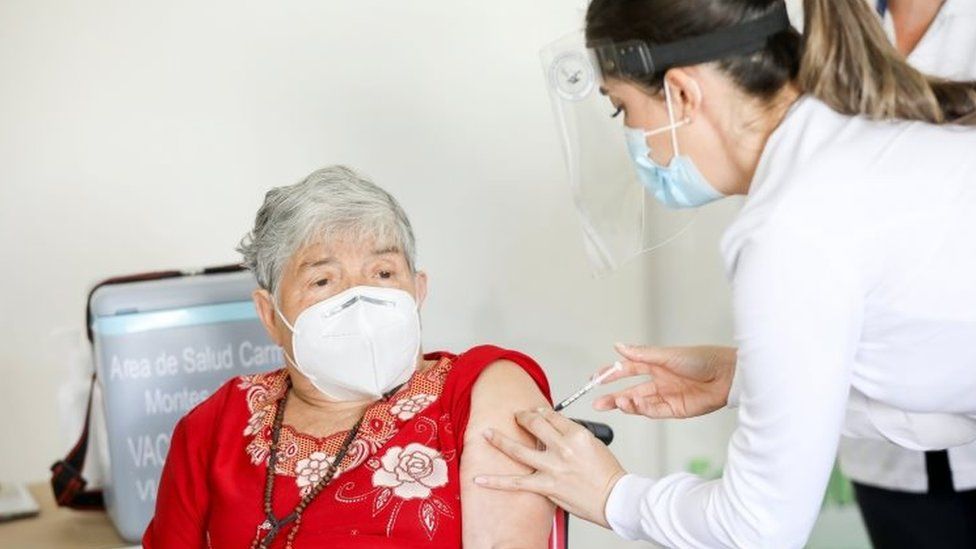 A Mexican nurse became the first person in Latin America to receive a coronavirus jab when her country began its vaccination programme on Thursday.

Mexico has received an initial shipment of 3,000 doses of the US-German Pfizer-BioNTech vaccine.

The country has one of the highest pandemic death tolls in the world, behind only the US, Brazil and India.

Argentina also plans to start inoculations in the next few days but has chosen the Russian-produced vaccine Sputnik V for its initial phase, with a delivery of 300,000 doses arriving in the capital Buenos Aires on Thursday morning.

Brazil, which has recorded the highest number of deaths in the region, is not due to start until mid-February despite a recent surge in the number of cases.

President Jair Bolsonaro says he is not planning to be inoculated. He believes he has developed immunity against coronavirus as he tested positive earlier this year.

In Mexico, María Irene Ramirez, 59, the head of the intensive care unit at Ruben Leñero Hospital in Mexico City, was the first to volunteer to be vaccinated.

“We are afraid, but we have to move on… and I want to stay in the line of fire,” she said afterwards, according to El Universal newspaper.

The first 3,000 doses – of 34 million purchased – arrived in Mexico on Wednesday from Belgium, where they are being manufactured.

The Mexican government says it wants to vaccinate all health workers fighting the pandemic by the end of the first quarter of 2021.

The country has recorded more than 1.3 million infections so far, with at least 120,000 Covid-related deaths, according to Johns Hopkins university.

Chile’s President, Sebastian Piñera, described the start of his country’s national coronavirus immunisation programme as a moment of hope and excitement.