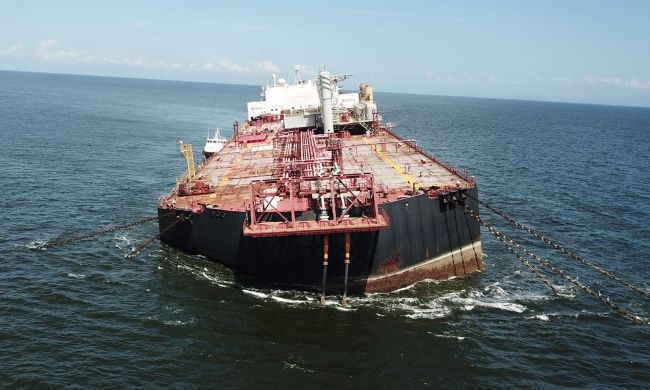 The FSO Nabarima has shown minimal to no risk of an oil spill from the vessel.

That’s the assessment made by the local team of experts, who ventured on Tuesday to the troubled vessel to get a first-hand view of the condition as it relates to its stability.

He said Venezuelan state oil company PdVSA confirmed that in the engine room, which was flooded, there was no mixing of bilge water, suggesting the double hulls are intact and pose minimal risk for an oil spill at this time.

The experts also stated that “Major maintenance is ongoing, with pumps and motors being repaired and replaced as needed; and the current maintenance programme on the ship is satisfactory.”

Khan added that “Based on concerns of environmental risk, Venezuela has started to offload the vessel.”

Khan said among the recommendations made by the team was that permission should be sought from the Venezuelan authorities for a follow-up visit in a month’s time to ensure the situation has not changed for the worse.

He noted that “The team saw the Venezuelans and PDVSA had started to offload the vessel, however, the offloading process is very tedious as it is being transferred to a much smaller vessel with a capacity of just about 300,000 whereas the FSO Nabarima has a capacity of 1.3 million barrels, therefore, it will take about four trips to complete. The team is recommending that efforts should be made to do a ship-to-ship transfer with a larger tanker to reduce the time and the logistics of the transfer and this will reduce the possibility of any environmental incident occurring in the Gulf of Paria.”

He assured that a full report would be presented to the media and the public today.

The report by the team of experts is surprising as video and pictures from an expedition last Friday, conducted by the group Fisherman and Friends of the Sea, showed the vessel listing severely to one side and held in place by anchor chains.