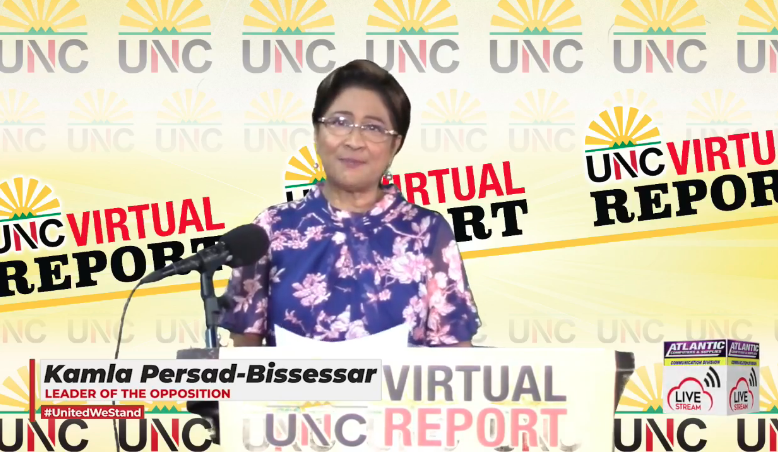 Opposition leader, Kamla Persad-Bissessar has issued a call for the establishment of a commission of inquiry for the purposes of examining the management and the expenditures government has used for Covid19.

At Monday night’s virtual meeting, Persad-Bissessar said she has drafted the letter and wants Prime Minister Dr Keith Rowley, as Head of the Cabinet to advise her excellency the President that it is advisable and for the public welfare to appoint a commission of inquiry under the commissions of inquiry Act Chapter 19.01 to inquire into the Trinidad and Tobago Government’s response to the Covid 19 pandemic and any related matters.

“You see the way in which the data is being collected I don’t believe we are being told the full truth about it. So we will see on a weekend and on a Monday the numbers go down.
We will see the graphs, they will show us the graphs they go up and then they do down. Because how? When are you measuring? I am told on the weekends. The health data is not being collected in the same way as during the week,” she added.

“So we need to see what methods in collecting Covid health data and the policy in dissemination of that said data. The method in obtaining scientific advice and to what extent was such advice followed in making decisions by the Government.
The Priorities and Government decisions and the method used to manage competing priorities along with all advice which the government received to curtail the movement and congregation of persons and any warnings of risks at any time of an increased number of infections.”

Persad-Bissessar said “Prime Minister it is in your remit to advise her excellency under the relevant law.”
“And Prime Minister you will not be alone in doing this, in the United Kingdom Prime Minister Boris Johnson has bowed to the public’s call for a full inquiry of his government’s handling of the Covid 19 pandemic. Although he did not promise a statutory inquiry which is what we are seeking. He set a loose time frame within the current timeframe of the Parliament. ”

She noted “As stated on the website of the office of the Prime Minister it says “ a commission of inquiry is appointed to investigate a matter of national importance and concern. There can be no doubt that the handling of the Covid pandemic, its expenditures, the curtailments of rights and freedoms and all other actions taken, are matters of major national importance and concern.”