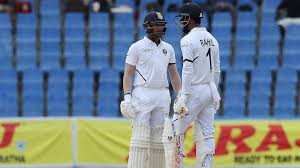 India restricted West Indies to 222 after scoring 297 in the first innings of the second Test at Sir Vivian Richards Stadium here on Saturday.

Windies resumed their play from 189/8 and were only able to add 33 runs to the total before bundling out on 222. The team is trailing by 75 runs.

Jason Holder and Miguel Cummins stitched a partnership of 41 runs for the ninth wicket.

Interestingly in the partnership, Cummins did not contribute a single run.

Holder played a knock of 39 before he was caught behind the stumps by Rishabh Pant off Mohammad Shami.

Shannon Gabriel added two runs for the tenth wicket before Cummins (0) was dismissed by Ravindra Jadeja. For India, Ishant Sharma scalped fifer while Shami and Jadeja bagged two wickets each.

Search on for man and woman following fight, chopping at South Park Mall 0