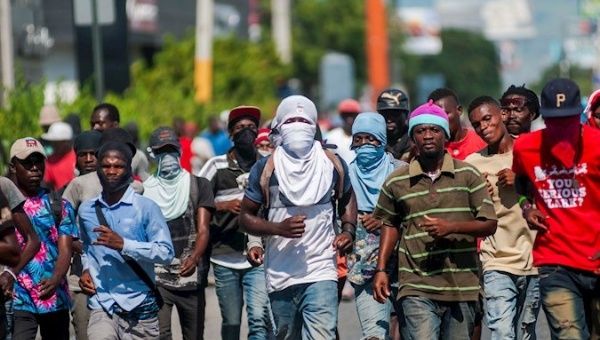 President Jovenel Moise says he has asked the United States to provide humanitarian aid to his country even as he insisted on the formation of a government of national unity to deal with the present socio-economic and political situation on the island.

Appearing on a radio and television programme on Monday, Moise, who has been under pressure from opposition parties to step down amid allegations of corruption, gave no details of the aid request made to Washington.

On Sunday, the United States in a statement said that “the apparent lack urgency to resolve the extended political stalemate is increasingly worrisome, as is the growing negative impact on public security, the economy, and the delivery of humanitarian assistance, including food aid”.

At least 20 people have been killed and several others wounded since opposition parties have been staging street demonstrations in support of their calls for Moise, who came to power in 2017 to resign.

The political and economic crisis in Haiti was triggered by the publication in January 2019 of a report on the Venezuela-funded PetroCaribe Oil initiative, under which Caracas provided oil and other petroleum products to Haiti under a preferential agreement.

Moise has denied any wrongdoing and has named former prime minister Evans Paul to head a team that would hold discussions with all stakeholders to discuss a way forward.

In his interview on Monday, Moise re-stated his position regarding the formation of a government of national unity and invited the opposition, which has in the past blanked his request, to be part of the initiative.

Moïse told the interviewers that Haiti is currently at a crossroads, “in which we can turn this crisis into an opportunity”.

He warned that a vacancy in the Executive would plunge the country into greater chaos, noting that since 1986, after the downfall of the Duvalier dictatorship, the country has had 16 presidents.

In his interview, Moise defended the cancellation of contracts with private power companies, many of which were signed under transitional governments, to the detriment of the interests of the State and the majority population.

“We took the decision,” he said, noting that in one instance if the contract had been accepted “it would have cost the country about US$20 million”.

Last Wednesday, the government in an effort to re-negotiate the contracts with the power companies, it had instructed the Ministry of Economy and Finance to suspend payments of any value in connection with the execution of electric power contracts signed between the Haitian State and the firms Sogener S.A., E-Power S.A. and Haytrac.

Moise apologised to the nation for not having adopted these provisions before, indicating also that while he does not intend to nationalize a company, he would rather to carry out reforms in the energy sector, which would improve state revenues.

In a statement Tuesday, the Electricity of Haiti (EDH) company said it wanted to inform the general public that “it has taken all necessary measures to maintain the level of service provided….(over the )months.

“As a result, it is able to ensure continuity of service in the event that one of the producers has difficulty meeting its commitments to it.”

Regarding the elimination of all customs exemptions, except those provided by law, Moïse defended the recent measure approved by the Council of Ministers and noted that the State had for many years been “hostage” to a “mafia sector”