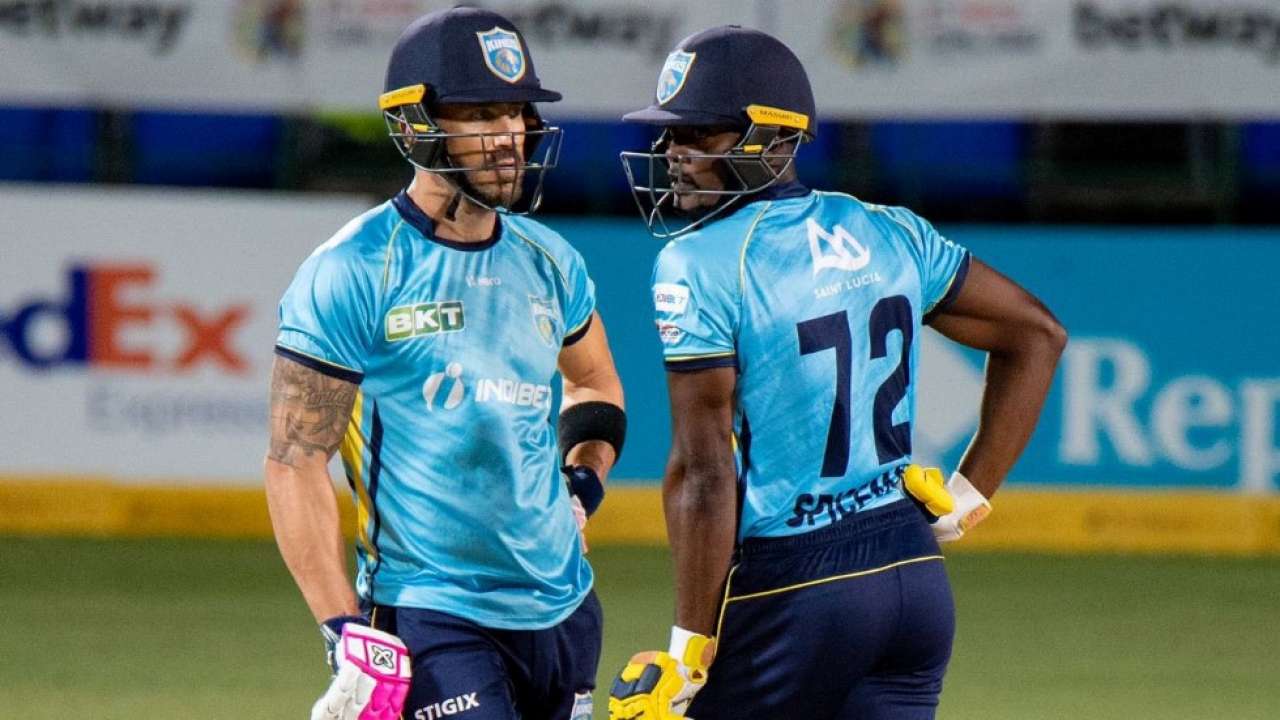 St Lucia Kings sealed a comfortable win over bottom-placed Barbados Royals in a rain-affected game after Faf du Plessis crunched a 54-ball 84 in the first innings which was followed by a David Wiese five-wicket second-innings haul.

du Plessis hit five fours and four sixes from No. 3 and kept scoring at a positive tempo despite the Kings losing three wickets in the powerplay. The openers perished to Mohammad Amir and Roston Chase went back after a seven-ball duck, but, du Plessis kept finding the gaps. Against spinners Jake Lintott and Joshua Bishop he played the cut and sweep, and against the pacers he looked to hit straighter over extra cover or in front of midwicket.

He fell in the 17th, 16 short of what could’ve been a second CPL 2021 century, but the base was set for the final impetus. Tim David found his levers to clatter 34 in 23 balls while Keemo Paul added another 22 in 11. The result was Royals needing 175 to keep their slim playoff chances alive.

And it looked like the Royals could pull it off when Johnson Charles and Shai Hope excelled in the powerplay. After Kyle Mayers fell in the third over, Charles and Hope hit Wahab Riaz and Alzarri Joseph for plenty of boundaries to race away to 56 for 1 in six. But Wiese – who will represent Namibia at the T20 World Cup next month – quickly changed the scenario in the space of six balls in the ninth over by removing both set batters and taking a third too.

He first sent Charles packing with a cutter that was too wide for the batter to play at. Sliced in the air, Wiese called for the catch. Glenn Phillips – averaging just over 20 this season – was then caught behind by a quicker ball for a golden duck, and Hope was gone last ball of the over when his cut off a rising ball took an edge to stand-in captain Andre Fletcher with du Plessis not on the field.

Jason Holder then kept the fight on for Royals by hitting left-arm spinner Royal for three sixes and a four in the 13th over to keep the required run-rate in check. But from the other end the boundaries were not coming, instead the allrounders Thisara Perera and Nyeem Young were out in single digits. Eventually Holder fell victim at 34 to a Wiese slower ball, and just as he was celebrating his fourth wicket, the covers came on.

Play resumed 45 minutes later, with only one over lost and Royals needing 52 in 3.3 overs. That was, however, too much for Royals’ lower order to pull off despite some late hits from Hayden Walsh. Wiese removed Walsh in the game’s last over, which also officially brought down the the curtains on Royals’ chances of making the playoffs.