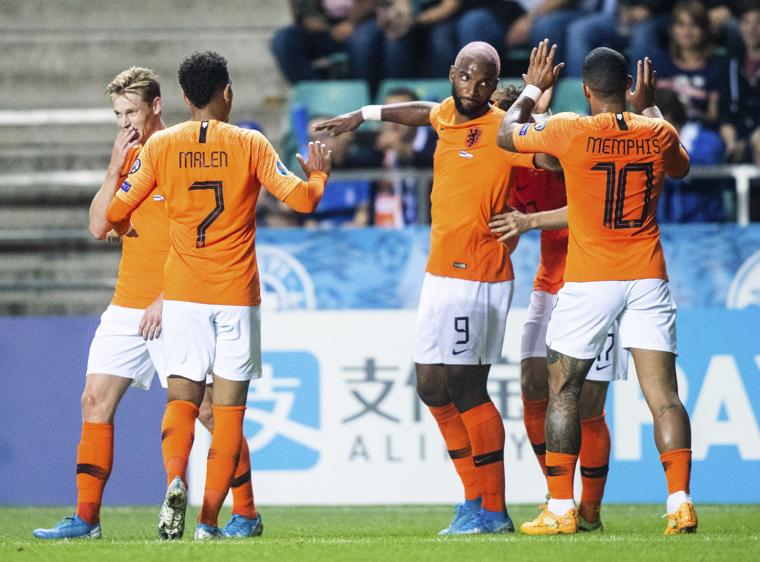 Germany flirted with defeat for a second straight European Championship qualifier before Marcel Halstenberg’s first international goal lifted the team to a 2-0 win over Northern Ireland on Monday (Tuesday NZT).

Coming off a 4-2 loss to the Netherlands, Germany’s recovery was unconvincing, helped by Northern Ireland wasting good chances.

The Dutch delivered another impressive attacking display as Memphis Depay marked his 50th game for the Netherlands by scoring one goal and setting up two more in a 4-0 win over Estonia.

Belgium made qualifying seem a pushover by beating Scotland 4-0 to keep a perfect winning record, but other favourites faltered. Croatia and Poland both dropped points but remain top of their increasingly competitive groups.

More than a year on from its embarrassing group-stage elimination at the World Cup, Joachim Löw’s team still struggles to get what should be routine wins.

Just as South Korea ran Germany into the ground at the World Cup, so hard pressing from Northern Ireland nearly earned an upset win in Belfast. The host had the better of the first half. Conor Washington had one good shot saved by Manuel Neuer, and later tripped over the ball in front of goal, missing the best chance of the game.

Germany emerged from the break refreshed and needed just three minutes before Halstenberg volleyed the ball into the net after Julian Brandt flicked on a cross.

Stuart Dallas then went close for Nothern Ireland, who continued to challenge until deep into stoppage time, when Serge Gnabry grabbed Germany’s second goal on a counter.

“They pressed us hard in the first half, but at some point they got tired,” Halstenberg said. Asked if Germany was getting back to the level of Europe’s best, he was diplomatic. “It’s hard to say.”

Ryan Babel was crucial in the Netherlands’ come-from-behind win over Germany on Friday and he tore up another defense on Monday, scoring twice against Estonia.

It was the first time Babel scored two in an international game and left the Dutch third in Group B, though they’ve played one game fewer than everyone else.

The Netherlands’ home-and-away games against Northern Ireland next month and in November will likely decide the automatic qualifying places in Group C.

World Cup finalist Croatia was held by outsider Azerbaijan to 1-1 on Monday, denting its chances of reaching next year’s European Championship.

Croatia won an early penalty for handball, converted by captain Luka Modric, but Azerbaijan wing back Tamkin Khalilzade cut in from the left in the 72nd minute and beat Dejan Lovren before shooting past goalkeeper Dominik Livakovic.

For Azerbaijan, a Euro 2020 host, it was the first point of the qualifying campaign after four straight defeats.

Croatia leads Group E by a single point from Slovakia and Hungary with two qualifying spots available. Slovakia beat Hungary 2-1 to move up to second. The other team in the hunt for qualification, Wales, was playing a friendly.

Scotland’s Hampden Park was a walk in the park for Belgium.

The visitors were three goals up after just 32 minutes as they kept a perfect record of six wins from six in qualifying. With an 11-point cushion to third-placed Kazakhstan, Belgium could seal qualification in its next game against San Marino.

Belgium’s goal difference of +18 is the best of any team in the qualifying competition and its gone five competitive games without conceding.

Russia kept second place in Group I, but was lackluster in beating Kazakhstan 1-0, needing an 89th-minute headed goal from right back Mario Fernandes.

After a fourth defeat, Scotland was in fifth place. It has never finished a European Championship qualifying campaign below fourth.

Poland looked a dead cert to qualify until last week, and now that seems a long time ago.

After four straight wins, a 2-0 loss to Slovenia on Friday rattled the Poles. A 0-0 draw with Austria on Monday left Poland with its lead cut to two points.

The competition’s top scorer, Eran Zahavi, netted his ninth goal in qualifying as Israel turned a 1-0 deficit into a 2-1 lead, but Roman Bezjak drew Slovenia level before winger Benjamin Verdic scored the winner.