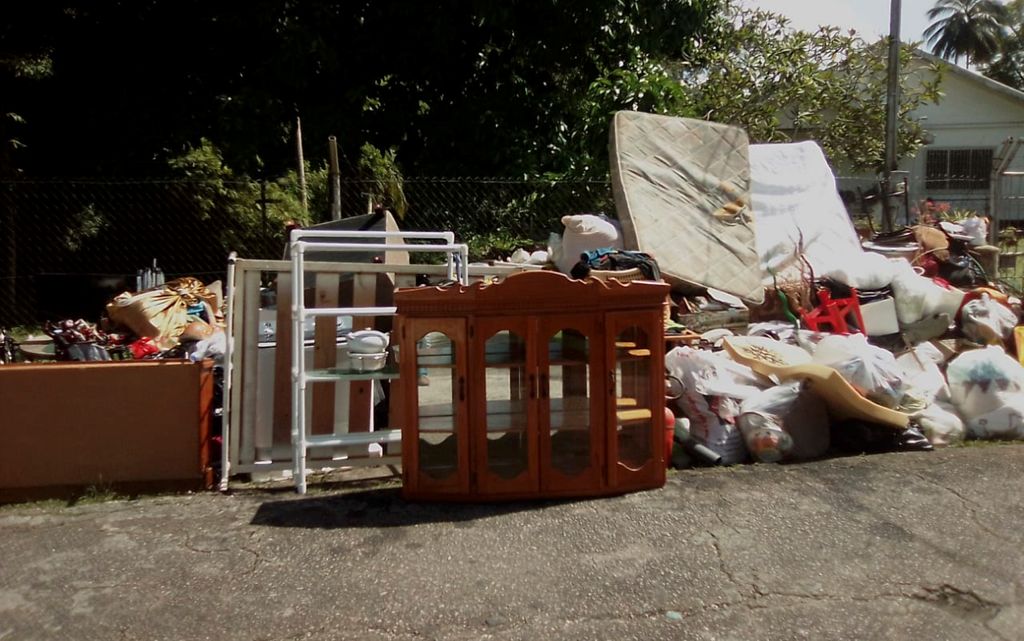 One of the families include a man, his wife, and a 3-week old baby, but police said that the families were occupying the premises illegally.

A few families, however, some of them Spanish-speaking nationals, claimed that they have been living there legally as they have paid rent to someone on a few occasions.

The families had all their belongings thrown at the side of the road, while the gates to the bungalows were padlocked preventing them from entering the premises.

Some of the families said that they will sleep in their cars or stay with relatives until the matter is resolved. Some say they may even have to camp out at the side of the road as they have nowhere to go.

Over 15 tenants were taken to the police station for questioning.

Akeile Francis, one of the tenants, said he got a call from his wife who was taken to the police station with his children.

“I was in work when I got the call and I went home to see all the stuff on the road. My wife was arrested and all the children taken down to the station. I went to the station and got my kids. My wife, who had our three-week-old baby, was released after 12 (noon).”

Francois, who had been living at the Bungalow for over a year said he was paying $2,000 a month to rent the bungalow. He said the person he was paying the money to, showed him documents that proved that he was in charge of the land.

He said police took his rent receipts to assist in their investigation. He added that he was not served an eviction letter or notice that he would need to leave the premises.

MP for Point Fortin Kennedy Richards Jr told Newsday that the families were evicted because they occupied the lands illegally.

“There are people there who were occupying former Petrotrin bungalows which were used to house some of employees who were at managerial level,” he said.

“They would have gone into those houses when the company was restructured. It was aided and abetted by an individual duped the families by claiming he had ownership of the land and properties. He started to have open-houses for rent, leasing and sales. We ended up with a lot of people who are illegal tenants,” the MP said.

The families had planned to hold a meeting at the Clifton Hill Clubhouse later that day to decide their next steps.

On Monday, the Housing Development Corporation issued a warning to the public to be aware of housing scams that were, once again, on the rise.