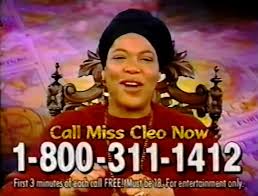 Documentary set to explore the life and career of Miss Cleo

Now a documentary is set to explore the life and career of the woman who personified clairvoyance onscreen.

According to Deadline, nonfiction entertainment studio XTR and production company Majority are producing the film.

Claiming to be a shaman from Jamaica, Miss Cleo’s charisma and famous imperatives enabled the Psychic Readers Network, a pay-per-call service, to charge callers seeking answers over $1 billion for advice.

However in 2002 it all came crashing down when the Federal Trade Commission accused the network and its owners of deceptive advertising, billing, and collection practices, bringing Miss Cleo’s reign as queen of clairvoyance to a dramatic end.