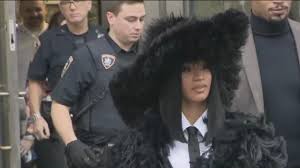 A hearing took place on Monday 18 October in Queens Criminal Court for rapper Cardi B who pleaded not guilty to charges of reckless endangerment and assault.

The rapper turned down the chance to plead guilty to third degree assault in exchange for a conditional discharge.

According to CBS New York, the 29-year-old was allegedly involved in a brawl at a Flushing strip club in 2018.

Cardi B was accused of throwing a bottle at two bartenders and ordering friends to attack them.

If convicted, Cardi could face up to four years behind bars.