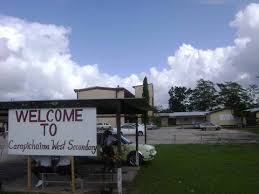 Forms 4, 5 and 6 students return to school on Monday 8 February to complete school based assessments and laboratory work in preparation for exams.

But one school is no way close to being ready for the return of pupils, and that is the Carapichaima West Secondary School.

President of the Parent Teacher Association for the School, Michelle Omar-Leiba, has revealed that the school is in a deplorable state and not fit for occupation.

Omar-Leiba in a press release on Thursday, said, “The existing school is now 41 years old and for the past 15 years, a ‘new’ school that was constructed under a former PNM Government which is somewhere around 80% complete and has not had any works resumed in the past 6 years under this present PNM Government.

“The existing school has been unused for just about one year now; there is mold and mildew everywhere, exposed steel beams and other safety issues in areas where students congregate, classrooms with ceiling problems and other OSH nightmares.

“Yet, as of Monday February 8, 2021, we the parents of students at Carapichaima West Secondary are being asked to entrust our children’s safety to such an environment.”

She said she has written to the Minister of Education but received only a superficial response.
Omar-Leiba is calling on the authorities to complete the school in the shortest possible time.