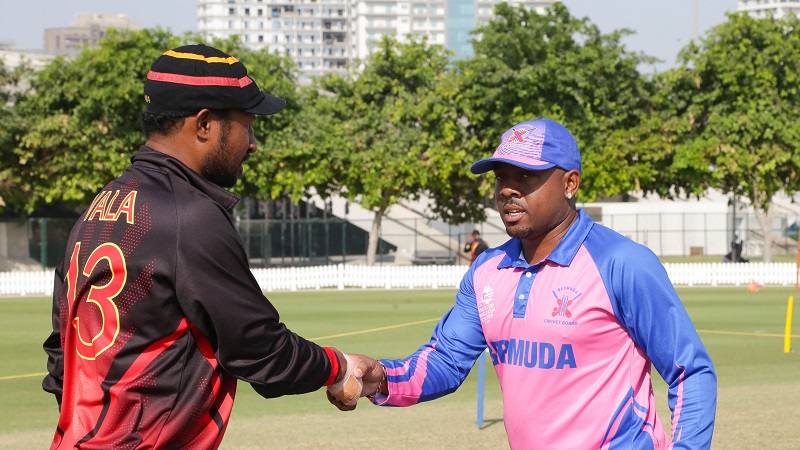 Bermuda’s 10-Wicket Defeat at the Hands of Papua New Guinea in Dubai.

Bermuda’s hopes of securing a place in next year’s ICC T20 World Cup in Australia received a massive setback when they crashed to 10-wicket defeat in their opening Qualifier Group A match against Papua New Guinea at the ICC Academy on Saturday.

A Norman Vanua hat-trick stunned Bermuda, who struggled to 89 all out before PNG’s captain Assad Vala led the reply with an unbeaten half-century as the Pacific Islanders galloped home with almost half their overs unused.

Vala’s unbeaten 53 came from 35 balls and included seven fours and a six while Tony Ura finished on 33 not out off 27 deliveries with four boundaries.

Bermuda will look to bounce back when they take on Singapore on Sunday.

Having been put in to bat, Bermuda were immediately on the back foot as Okera Bascome (6) and Janeiro Tucker (4) both fell inside the first two overs.

When the teams had last met in Dubai in 2012, Tucker hit three sixes in the final over to complete a stunning five-wicket victory.

Things went from bad to worse for Bermuda in the third over as medium-pacer Vanua (3-14) completed a hat-trick, removing captain Dion Stovell for one before dismissing Kamau Leverock and Deunte Darrell for successive golden ducks.

The procession of wickets left Bermuda 11 for five after just three overs and staring down the barrel as early as the midway stage of the first powerplay.

The tumble of wickets halted briefly when Sussex all-rounder Delray Rawlins launched a counter-attack, striking 25 off 17 balls with four fours, in a 33-run sixth wicket stand with Malachi Jones (11).

But once both departed, Bermuda slumped further to 58 for seven with more than half their innings still to go.

Rodney Trott (19) and Allan Douglas (12) provided late resistance, but by the time Trott was run out as the last wicket to fall, Bermuda had succumbed to 89 all out, with 16 balls to spare.

PNG’s openers Vala and Ura then knocked off the runs in 10.2 overs despite Bermuda using seven bowlers to break the partnership.

PM welcomes start of Ramadan, says worshippers can return to some state of normalcy 0