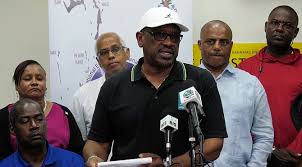 The Bahamas government warned that persons harbouring illegal immigrants would be fined US$6,000 as it sought to provide a clearer understanding of the recently announced suspension of a crackdown of illegal migrants.

Earlier this week, the Minister of Financial Services, Trade, Industry and Immigration, Elsworth Johnson said that with the country “presently experiencing a humanitarian crisis in aftermath of Hurricane Dorian, strict instructions have been given to the Immigration Department that our concentration is on assisting with the humanitarian efforts to rescue and save lives regardless of place of origin, nationality or immigration status”.

But, speaking to reporters after the weekly Cabinet meeting, Johnson said that while the government has no plans to grant asylum to persons, the suspension of the crackdown on immigration would cater only for residents in the Abacos and Grand Bahama islands that were severely affected by the hurricane when it hit on September 1.

“Having regard that we’re now facing a humanitarian crisis, the government is making the decision that those immigration policies or enforcement measures suspended forthwith in the affected areas – that’s the Abacos and Freeport, Grand Bahama,” Johnson said.

“Why I say we were extremely careful because the notice sent out does not include islands like Inagua, Cat Island and San Salvador, Long Island, whatever have you. We still have the constitutional right to safeguard our borders.”

The Immigration Minister said that the authorities are “obligated to, and will continue to, secure our borders, all domestic apprehension exercises in the affected areas are suspended.

“We also invite all in our community to assist as best they can with the humanitarian efforts now underway,” he said, adding that Prime Minister Dr. Hubert Minnis had not instructed him to grant asylum to any migrants from the impacted areas.

“We know that there are a number of persons who ought not to be here,” he said, adding “for those unaffected areas, know that we will be out there. I have said to the immigration director, and I have a serious concern that when sometimes we do these enforcement measures that nobody is being arrested for harbouring.

“So, I want to say to the Bahamian public, I don’t want anybody to be calling me. If you’re found harbouring anybody, that will assist us greatly, the $6,000 you’ll have to pay.”

Prior to the passage of the hurricane, the Bahamas had implemented a crackdown on illegal migration, particularly directed at persons from Haiti. A Bahamian immigration policy requiring that all residents carry passports has led to increased raids of shantytowns and other areas with large undocumented populations.

Meanwhile, the National Emergency Management Agency (NEMA) said that an estimated 2,500 people have been registered as missing on the government’s register in the wake of the hurricane.

“This list has not yet been checked against government records of who are staying in shelters or who have been evacuated,” said NEMA spokesperson, Carl Smith.

“The database processing is underway. Some individuals who evacuated from Abaco and Grand Bahama have not yet registered with (The Department of) Social Services. We encourage them to do so at the Department of Rehabilitative and Welfare Services,” he added.

Prime Minister Minnis is due to address the country later on Wednesday night.