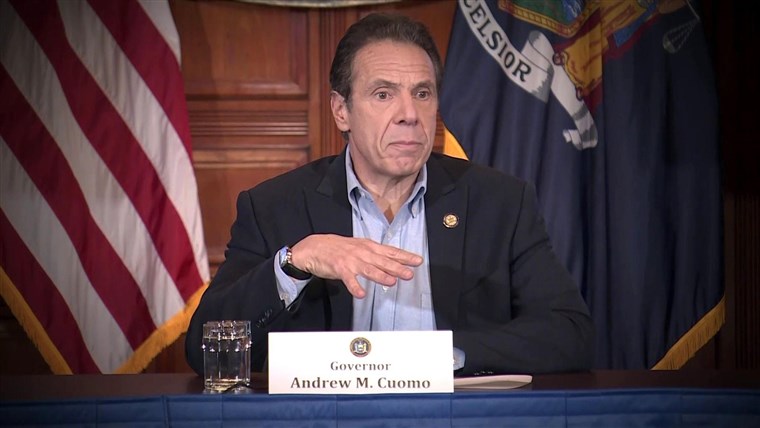 Charlotte Bennett, a health policy adviser to Mr Cuomo until November, told The New York Times that he had harassed her last year.

Mr Cuomo has denied any inappropriate behaviour and ordered an independent inquiry into the allegations.

Another former aide, Lindsey Boylan, has previously accused the governor of sexually harassing her.

Mr Cuomo, 63, who has been governor for more than a decade, has found himself under pressure on several fronts in recent weeks.

He is under scrutiny from the Democratic Party – of which he is a member – for allegedly hiding the true number of Covid-related deaths in New York care homes.

Ms Bennett, 25, told the New York Times that the governor had asked her numerous questions about her personal life including whether she believed that age made a difference in romantic relationships.

She said he had also suggested that he was open to relationships with women in their 20s. Ms Bennett said she believed the comments were clear overtures to a sexual relationship.

In the interview, she said that in June last year Mr Cuomo had talked about feeling lonely during the pandemic and had asked her whom she had last hugged.

She said she dodged the question by saying she missed hugging her parents, but she believed the conversation had been another overture.

“I understood that the governor wanted to sleep with me, and felt horribly uncomfortable and scared and was wondering how I was going to get out of it and assumed it was the end of my job,” she said.

Ms Bennett said she informed Mr Cuomo’s chief of staff, Jill DesRosiers, after the interaction and less than a week later was transferred to another job.

She said she had decided not to seek a formal investigation because she “wanted to move on”. No action was taken against Mr Cuomo.

In a statement released on Saturday, Mr Cuomo said he believed he had been acting as a mentor to Ms Bennett.

He said he had “never made advances toward Ms Bennett, nor did I ever intend to act in any way that was inappropriate”.

“The last thing I would ever have wanted was to make her feel any of the things that are being reported,” Mr Cuomo said.

He said he had authorised an external review of the matter.

“I ask all New Yorkers to await the findings of the review so that they know the facts before making any judgements,” Mr Cuomo said.

She accused Mr Cuomo of kissing her on the lips and asking her to play strip poker while on his private jet.

She also claimed that he touched her without consent and frequently made inappropriate comments to her and other women about their appearances.

Mr Cuomo had denied the accusations when they emerged late last year and reiterated those denials after the essay was published.

New York was one of the US states worst hit by the pandemic and the governor won widespread praise for his response.

However, in January a report about New York’s response to Covid in care homes – and the handling of related data – said it appeared a complete tally had not been provided to state lawmakers.

More than 15,000 New Yorkers in care homes have died since the start of the pandemic – believed to be the highest of any state in the US.

But until January, the state’s health department had logged just over 8,500 fatalities.

Three-year-old drowns in blow up pool in Gasparillo 0