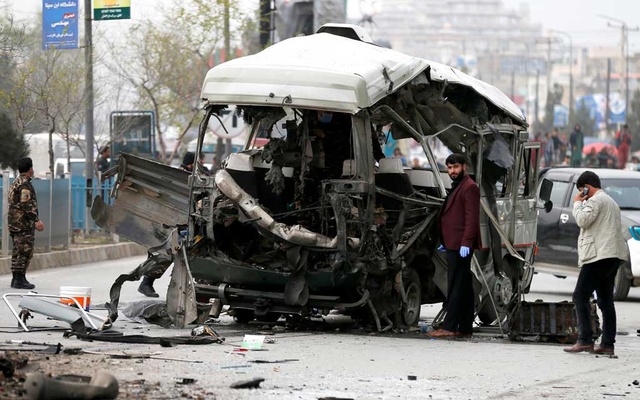 Tariq Arian confirmed that four people from Al-Biruni University were killed in the explosion and 11 were injured in a tweet Saturday morning, according to a translation by The Hill.

Three of the victims killed by the bomb were university professors, according to BBC News, which added that at least four more people were injured in the explosion for a total of at least 15.

Parwan Hospital Chief Medical Officer Qasim Sangin told TOLO News the explosion occurred in the Rabat area in the Bagram district of Parwan, and 17 were injured, including three in critical condition.

No one has claimed responsibility for the attack.

Violence has increased amid the U.S. pullout of troops, which the Pentagon announced Wednesday was 25% complete and on schedule to be completed by Sept. 11, marking the end of the United States’ longest war.

Among the recent attacks, a bombing outside Sayed Ul-Shuhada high school in Afghan’s capital Kabul on May 8 killed at least 90 people, many of who were teenage girls leaving class, The New York Times reported.

An Interior Ministry spokesman told The Times more than 100 people were injured in the Kabul bombing.

The Taliban denied responsibility and condemned the school attack on social media, but the presidential palace still blamed the killings on the militants in a statement to The Times.

At least 140 pro-government forces and 44 civilians were killed from the eve of U.S. troop withdrawal on April 30-May 6, the highest death toll in a single week since October, according to a Times analysis.

The Taliban urged neighboring countries in a statement Wednesday not to host the U.S. military as the Pentagon considers leaving troops elsewhere in the region.

“Foreign forces are the root cause of insecurity and war in the region,” the Taliban statement said. “As we have repeatedly assured others that our soil will not be used against the security of others, we are similarly urging others not to use their soil and airspace against our country. If such a step is taken, then the responsibility for all the misfortunes and difficulties lies upon those who commit such mistakes.”

Devant says Kamla all about herself 0