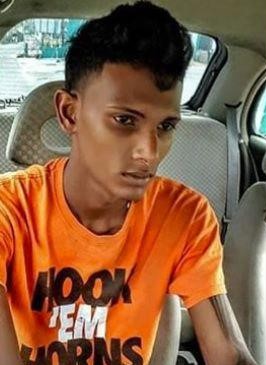 A family is trying to determine the mysterious circumstances surrounding the disappearance of their relative, Shane Ramjattan.

Ramjattan was last seen by his mother, Radica Ramjattan, when he left their Rochard Road, Penal home go to work on Wednesday morning. Shane is a delivery driver, and had collected bottled coconut water from the factory for deliveries. Later that day, around 8:00p.m, Shane and his father were at a bar. His father told his mother that they were leaving the bar and that Shane would follow him in his car. But, Shane never returned home that night.

Shane’s mother texted and called on Wednesday night but to no avail. On Thursday, his mother got a report that his car was found abandoned in Moruga with his shoes and cellular phone. The container that carried the coconut water was not there.  She also said that it was strange that Shane’s shoes were in the van, “My son doesn’t walk barefoot, even when he is driving he wears shoes.”

His mother believes that he might have been robbed and kidnapped since he had funds from the coconut water sales and money from playing roulette at the bar. Radica said, “I don’t know if somebody was looking and watching him, I can’t say … Where is the cooler? It takes ten men to pick up that cooler if it is full. There were also wheel marks as if they were trying to pull out the van and couldn’t pull it out.”

Shane has tattoos on his chest, back and both hands.

Anyone with information concerning the whereabouts of Shane Ramjattan should contact Penal Police Station or the nearest police station.