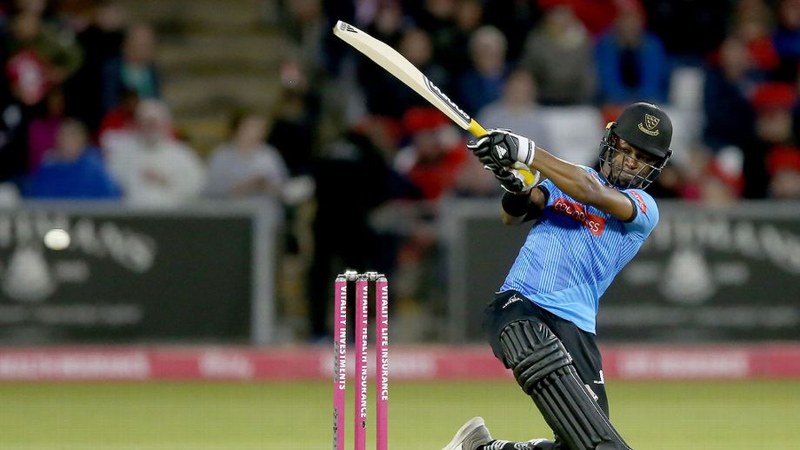 Sussex all-rounder Delray Rawlins’ decision to fly home paid dividends as he struck a half-century to lead Bermuda to an upset six-run victory over the United States on day one of the week-long quadrangular ICC Twenty20 World Cup Qualifier Americas final on Sunday.

Man-of-the-Match Rawlins, 21, hit six fours and three sixes in his 53-ball 63 to help Bermuda reach 141 for seven off their 20 overs after opting to bat first at White Hill Field.

He returned in a miserly four-over spell of one for 26 and also held two catches as the US were restricted to 135 for seven.

Rawlins’ availability for the tournament came after several weeks of negotiation between the Bermuda Cricket Board and his English county, for whom he made his maiden first-class century against Lancashire last month.

In the double-header’s first game, wicketkeeper Okera Bascome gave Bermuda a flying start, taking three fours off the opening over, but Rawlins had to come in to see off the hat-trick ball in the second over after Jessy Singh removed Kamau Leverock and captain Terryn Fray, both for naught, with successive balls.

In reply,  the US made a steady start, but 34-year-old fast-medium bowler George O’Brien rocked the visitors in the fifth over by removing former Jamaica and West Indies opener Xavier Marshall for four and then bowling Steven Taylor, who was born in Florida of Jamaican parents, for a first-ball duck.

Opener Jaskaran Malhotra made 38 and Aaron James, 39, at number five as the US stayed in the hunt, but their hopes dwindled when Hayden Walsh, who was born in the US Virgin Islands, was out for 21 at the end of the 18th over.

The US needed 14 to win off the final over and medium-pacer Leverock gave them a boost by delivering successive wides before finding his line and length.

Elsewhere, Canada also started on a winning note, crushing the Cayman Islands by 84 runs after their 30-year-old number four Ravinderpal Singh made 101 from 48 balls, smashing 10 sixes and six fours. Singh’s century helped Canada pile up a daunting 196 for six after winning the toss.

The top two teams in the Bermuda tournament will earn places in the final round of qualifiers to be held in the United Arab Emirates in October ahead of next year’s T20 World Cup in Australia. West Indies are the defending World Cup champions.