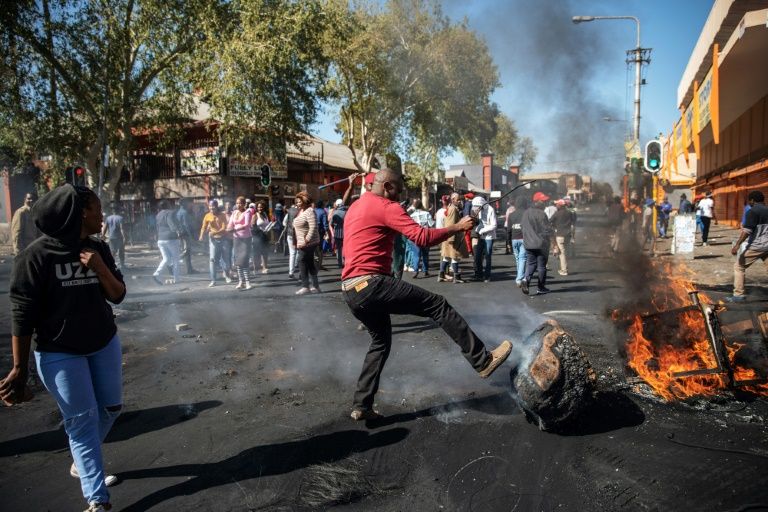 Five people have been killed in xenophobic violence in South Africa, police said on Tuesday, as President Cyril Ramaphosa vowed to clamp down on the attacks and the African Union and Nigeria sounded their alarm.

Hordes of people — come armed with axes and machetes — gathered in Johannesburg’s central business district (CBD) for the third day of unrest directed against foreigners, hours after mobs burned and looted shops in the township of Alexandra, prompting police to fire rubber bullets to disperse them.

Five deaths, most of them South Africans have been reported, police said, adding that 189 people had been arrested.

Attacks on businesses run by “foreign nationals are something totally unacceptable, something that we cannot allow to happen in South Africa”, Ramaphosa said in a video address diffused on Twitter.

South African police fired rubber bullets and patrolled parts of Johannesburg on Tuesday after the financial capital was hit by a new wave of anti-foreigner violence.

Rocks, bricks and rubber bullets lay strewn across the empty streets of Alexandra after mobs plundered the township overnight, burning and looting shops in their path.

The Alexandra Township was a scene to the second night of urban rioting in Johannesburg, where hundreds of people marched through the streets on Monday in an unusually large expression of anti-foreigner sentiment.

More than 90 people were arrested on Monday in connection with the violence and looting of shops in Johannesburg and surrounding areas, the government said.

”We have so far arrested over 90 people in Johannesburg for public violence,” Gauteng Police spokeswoman Mathapelo Peters told reporters in Johannesburg.

Many of the impacted property owners belonged to foreign nationals mainly from other African countries and Asia.

Such violence breaks out sporadically in South Africa where many locals blame immigrants for high unemployment, particularly in manual labour.

“They burnt everything,” Bangladeshi shopowner Kamrul Hasan, 27, said in Alexandra, adding that his shop gets attacked every three to six months.

“All my money is gone. If the (South African) government pays for my plane ticket, I will go back to Bangladesh,” he said.