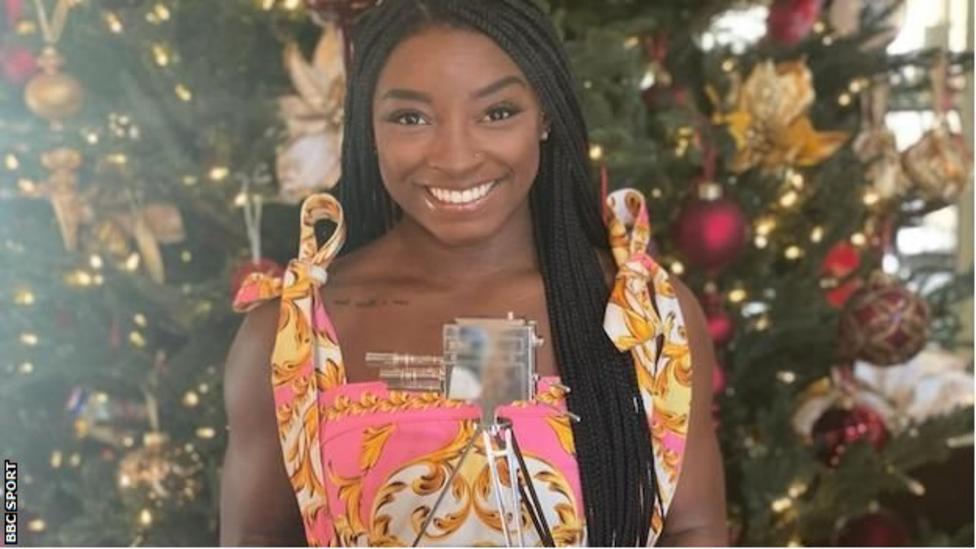 Biles, 24, is considered one of the greatest gymnasts of all time, having won four Olympic gold medals and 19 World Championship titles.

In 2018, she spoke candidly out about being abused by team doctor Larry Nassar, who is now serving a life sentence in jail.

She has also been praised for talking about her mental health struggles.

“When I see those names who have been honoured before me, I can hardly believe it,” she said.

Biles had been expected to win more golds at this summer’s Tokyo Olympics, but she withdrew from five of her six finals, saying she had to focus on her mental health.

She explained she had the ‘twisties’ – a dangerous mental block in which gymnasts lose their orientation in the air.

Biles later said she “should have quit way before Tokyo”.

Accepting her award, Biles said: “2021 wasn’t the year I was expecting. This summer, I had to take a step back from competition to recover from an invisible injury.

“That was the hardest decision of my life, but I chose to speak out to show mental health struggles are nothing to be ashamed of.

“I was expecting some criticism at first, but what happened was the complete opposite. The support and encouragement I received was overwhelming, and it fills my heart to think of those positive words.

“I want to take this moment to thank my team-mates, my friends, and my family, who gave me – and continue to give me – so much love and strength.

She added: “I’m so grateful to everyone in the UK who sent such supportive and loving messages to me at that time.

“What I will always treasure, more than any medal, is hearing how I may have helped someone feel a little better.

“I will carry on fighting for what I believe in, for sport to be a safer place for young people to grow and flourish, and I will continue to speak up about mental health.”