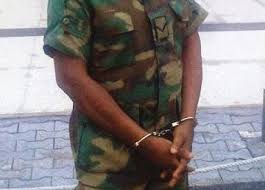 Soldier among 4 held for robbery and false imprisonment

A Lance Corporal of the Trinidad and Tobago Defence Force was among four suspects arrested by officers of the Eastern Division, following reports of robbery with violence, false imprisonment and demanding money by menace against a male victim on Sunday morning.

The victim told police that around 10:00 am on Sunday 24th July, 2022, he went to Milk Office Road, Sangre Grande, to assist a woman whom he knows in moving some pieces of iron which she wanted to sell. He claimed that on reaching the location, he was approached by two men who proceeded to beat him about the body and relieve him of his cellular phone, wallet and keys for his vehicle.

The victim claimed the assailants then tied his hands and legs before making contact with his mother and demanding that she pay them a quantity of cash for his release. The suspects then locked the victim in a room before leaving.

The victim said around 1 am on Monday 25th July, 2022, he managed to escape and contacted the police. Officers of the Eastern Division Emergency Response Patrol conveyed the victim to the Sangre Grande hospital for medical attention.

An investigation into the incident was launched which resulted in officers returning to Milk Office Road, where they arrested the three suspects; a 37-year-old woman of Gonzales, a 20-year-old man of Morvant and a 23-year-old man of Belmont. The victim’s wallet and motor vehicle were recovered at the scene.

A fourth suspect, a 38-year-old man of Curepe, subsequently visited the Sangre Grande Police Station around 5:10 am on Monday 25th July, 2022, and was arrested by officers in connection with the incident.

Teen to stand trial for murder 0