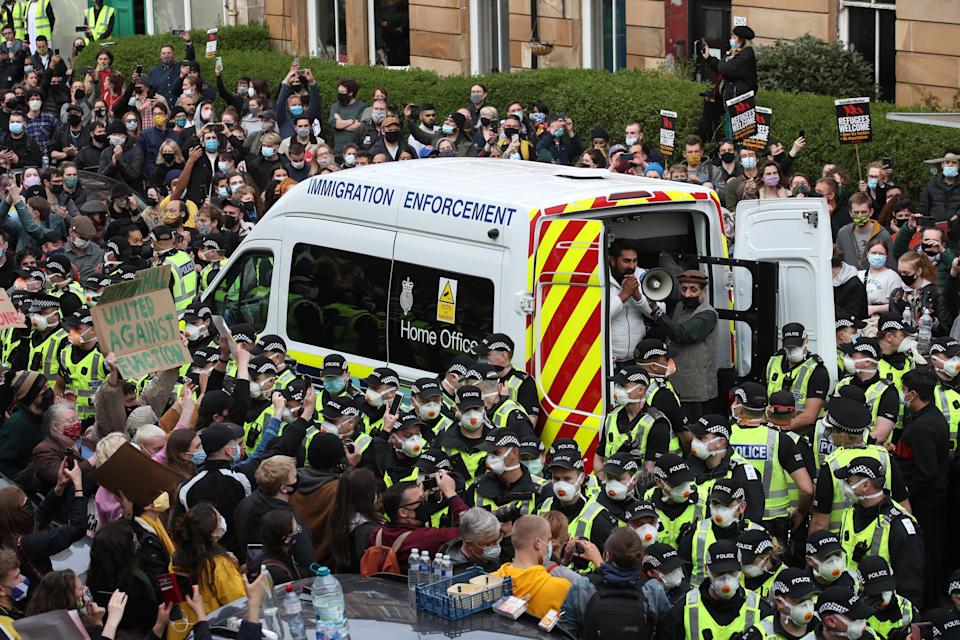 Scottish police ordered the release on Thursday of two Indian men who had been detained by British immigration officials after hundreds of protesters in Glasgow blocked the path of a van carrying the detainees.

Scotland’s First Minister Nicola Sturgeon, who wants to wrest immigration powers from the United Kingdom government, welcomed the police force’s actions and blamed the British government for what she called a “dangerous situation”.

Video footage showed the two men emerging from the back of a van belonging to Britain’s interior ministry, which sets immigration rules for the whole United Kingdom.

After a stand-off lasting several hours, a crowd of onlookers clapped and cheered as one of the men waved and police officers made space for them to walk free, pending further investigation.

British immigration officers had originally asked local police for assistance after a crowd gathered to block them.

Police Scotland said in a statement that it had “taken the operational decision to release the men detained by UK Immigration Enforcement back into their community”.

The police force said it reached this decision “to protect the safety, public health and well-being of all people involved in the detention and subsequent protest”. Large gatherings are currently banned in Scotland as part of anti-COVID measures.

Ms. Sturgeon, whose Scottish Parliament electoral district includes the area where the incident took place, said she had complained to the British government and asked it to avoid such situations in the future.

“No assurances were given – and frankly no empathy shown – when I managed to speak to a junior minister earlier,” she said in a statement.

Britain’s interior ministry said it would press on with plans to speed up deportations.

“The operation in Glasgow was conducted in relation to suspected immigration offences and the two Indian nationals complied with officers at all times,” a spokesperson said.

Ms. Sturgeon’s Scottish National Party won the largest number of seats in an election for the Scottish Parliament last week, which she has said vindicates her call for a re-run of the 2014 referendum in which Scots voted against independence.

The UK government on Friday defended the raid, insisting there was no connection to Eid.

“The operation was routine and in no way connected to Eid. We are tackling illegal immigration and the harms it causes,” Prime Minister Boris Johnson’s official spokesman told reporters.

“We will continue to tackle illegal immigration,” he added.