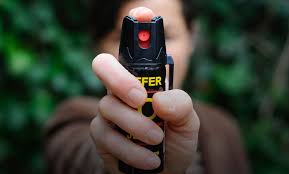 Police use pepper spray to arrest 8 in POS

Police used pepper spray during a confrontation in Port-of-Spain. In the end, the officers of the Port-of-Spain Task Force and Besson Street Police Station arrested eight persons.

Officers were on mobile patrol around midnight, on Friday 25th June, 2021, in the vicinity of Queen and Nelson Streets, Port of Spain, when they observed a group of persons gathered and consuming alcohol in public in contravention with the Covid-19 Public Health Regulations.

The officers approached the group and informed them of the breaches, which resulted in the persons becoming irate and using obscene language against the officers.
Officers managed to arrest one woman during the incident, but then found themselves surrounded by the group whose members began throwing objects and missiles in their direction.

The officers sought assistance from the Besson Street Police Station and a party of officers led by Sgt. Alexander responded and used pepper spray to effect several arrests in accordance with the Use of Force Policy.

Seven men, all of Port of Spain, were held by the officers are expected to be charged with various offences.
During the incident, several loud explosions were heard coming from the rooftop of a nearby building and the officers immediately proceeded in the direction of the noise. There, they observed a man holding a firearm and shooting into the air. The officers gave chase, but the man escaped. Several apartments were searched in attempts to locate the gunman, but they proved futile.

During the search, 1.3 kilogrammes of marijuana were found hidden on the rooftop of a building at Duncan Street Plannings.

No officers were injured during this exercise.
Investigations are ongoing.

“As result of these negligent actions, Jamaicans will die” – 723 new Covid cases 0