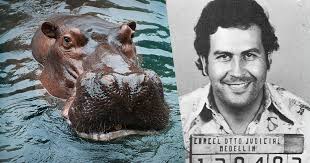 A group of Hippos belonging to former drug kingpin Pablo Escobar have been sterilized after wreaking havoc across Colombia!

The hippos were illegally imported in for Pablo Escobar’s private zoo and since his death in 1993, they have bred and multiplied.

Officials have sterilized 24 of over 80 Hippos. They will die out naturally after they have all been completely sterilized.

Before his death, the notorious drug lord purchased a number of animals including flamingos, giraffes, zebras, and kangaroos.

The hippos were shot with darts to inject them with a medicine called GonaCon per Cornare, which is an environmental protection organization in Colombia.

NALIS members given amnesty on overdue books and DVDs 0