Trinidad and Tobago’s island-Rock impresarios Orange Sky will take global music fans on a musical journey in celebration of the band’s 25th anniversary, with a virtual extravaganza this Saturday, March 27th at 8pm.

The event will be powered by cultural supporter Carib Beer.

The past 25 years have provided many musical highs for the Caribbean Rock-fusion ensemble such as opportunities to perform alongside the members’ music heroes from Rock giants Malmsteen, Kings X and Kansas to Reggae legends Steel Pulse, Damian & Stephen Marley and Beres Hammond as well as the chance to work on 3 albums with world-renowned record producers. 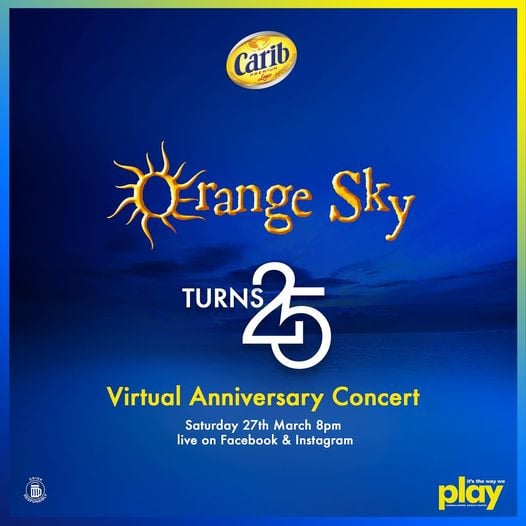 Regarding the motivation behind this forthcoming streamed event, the band’s frontman Nigel Rojas shared, “We wanted to share our pride, joy and gratitude with all our friends and fans around the world in the way that we know best …by jamming live! We’re looking forward to performing songs from our vast catalogue as well as brand new material from our upcoming album ‘Strange Days’.

With regards to the brand’s involvement in this significant milestone for Orange Sky, Category Manager of Carib Beer, Antron Forte shared, “There is tremendous musical talent in Trinidad and Tobago and we at Carib Brewery are always energized by the long standing contributions and achievements of our local stars, Nigel Rojas and the members of Orange Sky. Carib Beer continues to support our local artistes and we are elated to be part of this 25th anniversary celebration.

Experience the past, present & future of Orange Sky along with its signature Reggae-Rock style and unique Southern Caribbean vibe during its 25th anniversary Live Virtual Concert Experience on Saturday March 27th at 8pm (AST) via Carib Beer’s Facebook and Instagram pages and TegoTV.com.