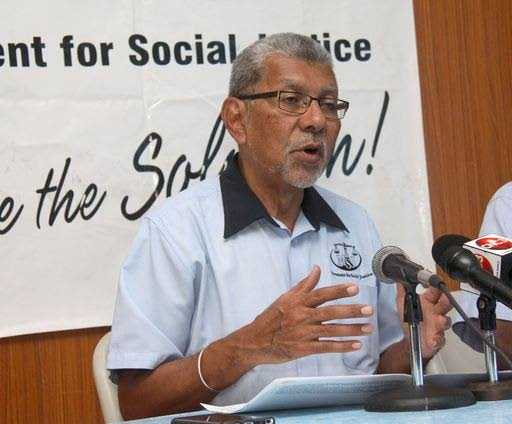 Head of the Movement for Social Justice (MSJ) David Abdulah, is calling for a roundtable comprising Government and Opposition MPs, to deal with the way forward for T&T post Covid19.

Abdulah, addressing a virtual media conference yesterday, believes that Prime Minister Dr Keith Rowley and Opposition Leader Kamla Persad-Bissessar should co-chair this roundtable, which, he added should also include two Government and Opposition MPs each, representatives of the PNM and PDP members of the Tobago House of Assembly and the 14 municipal corporations.

He said that with more than 300 of the 479 COVID-19 deaths occurring in May, the political conduct is failing the people who have lost loved ones and their livelihoods during the pandemic.

Abdulah explained that once convened, the round table will set up a national assembly: an interim body consisting of civil society, business, labour, NGO and Faith-based organisations. The roundtable should work out the details of the National Assembly, including the Terms of Reference.

Although the National Assembly would not have legislative power, Abdulah believes it can act as a consultative body that would enable national consensus on actions. These include steps to ensure the preservation of livelihoods and the process of recovery and changing Trinidad and Tobago.

According to Abdulah, “Given the participation of the Government and Opposition in key discussions on the way forward, an agreement to cease the partisan attacks at this time is in the national interest. There will be ample opportunity for party politicking after we have overcome the pandemic.”

The MSJ leader also asked that government introduce Rent Control legislation to protect tenants from being evicted during the pandemic. It can also stop landlords from raising rental prices.

Abdulah called for a meeting of the Central Bank and the commercial banks to reduce bank charges, provide a moratorium on loan payments and reduce interest rates. The Ministry of Finance, it said, should increase the Salary Relief Grant to $2,500 per month and extend it to the end of the lockdown and provide similar support to artistes.

He said there needs to be faster processing of the COVID-19 test as the MSJ received reports of people dying before getting their results.

He even suggested the use of some community centres as quarantine facilities as the process of home isolation does not cater for those that live in circumstances that do not allow social distancing or isolation.

TTPS get funds to acquire an additional 1,500 body cameras 0