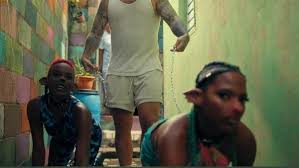 “Perra,” a collaboration with Dominican artiste Tokischa is about dogs in heat.

In the music video, Balvin is seen walking Black women styled like dogs on leashes and depicts them in cages.

The Latin artiste apologised to those he offended, saying, “I want to say sorry to whomever felt offended, especially to the Black community.“

Following criticism, even from the vice-president of Colombia, Marta Lucía Ramírez, who “called the visual ‘sexist, racist, machista, and misogynistic,’” the music video was eventually taken down.

Loading...
Newer Post
Trinidad And Tobago Pushing Towards Green Economy Transition
Older Post
On Tuesday The Names Of Persons In Public Life Who Failed To File Declarations Will be Published.