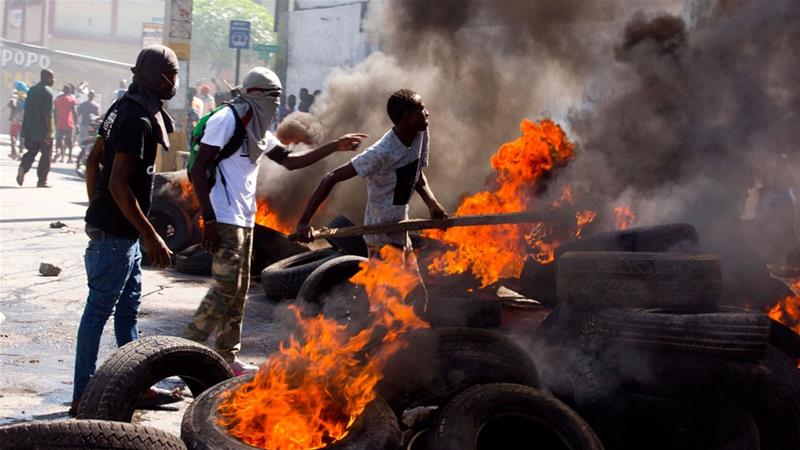 Haiti’s Justice Ministry has condemned the violence perpetrated during anti-government protests even as opposition political parties maintained their call for people to take to the streets to force the immediate resignation of President Jovenel Moise, whom they have accused of being corrupt.

The Minister of Public Health, Marie Greta Roy Clément, also condemned the attack on an ambulance of the National Ambulance Center (CAN), saying it was on its way in response to an accident when unidentified people threw stones at the vehicle despite the fact that it and ambulance staff were clearly identified.

The Ministry of Public Health said that ambulances are used to provide emergency pre-hospital care and transport for the sick, wounded, pregnant women, and anyone else, to the hospital or health center.

Clement said the ambulances are at the service of the entire population and that they must be protected and facilitated, whether public, private, hospital or charitable, noting that to demonstrate is a right, to attack the ambulances is a crime”.

The Justice Ministry in its statement praised the professionalism of the police officers, who it said reacted tactfully and moderately despite “all kinds of provocations”.

The Ministry is promising that the perpetrators of the violence, vandalism, looting and other crimes will be brought to justice.

President of the Bar Association of Port-au-Prince, Stanley Gaston, said attorneys were concerned about the situation in the country.

“In any case, whatever be the exculpatory arguments, the President of the Republic, embodying the public power and having the imperative mission to bring peace and serenity essential to the functioning of institutions, must, without hesitation, take the decision that is required,” he added.

The spokesman for the opposition parties, André Michel, has called on demonstrators to set up barricades and remain on the streets until Moise, who came to office in 2017, leaves the office.

“From north to south, from east to west, barricade, demonstrate, occupy the macadam until the installation of the transitional government,” he added.

The demonstrators have attacked and vandalized several government buildings and have also set fire to a police station forcing the occupants to flee the building.

The National Police of Haiti (PNH) said armed bandits were taking advantage of the unrest in the French-speaking Caribbean Community (CARICOM) country to commit attacks on police stations and courts, freeing prisoners and destroying evidence and records.

The PNH said it was urging leaders and organizers of the demonstrations as well as citizens to cooperate with law enforcement officials to detain the armed gunmen.

Haitians have been taking to the streets in recent weeks as a result of a deepening economic crisis along with chronic food and fuel shortages, setting fire to homes and various business places.

Search is on for missing persons at sea 0